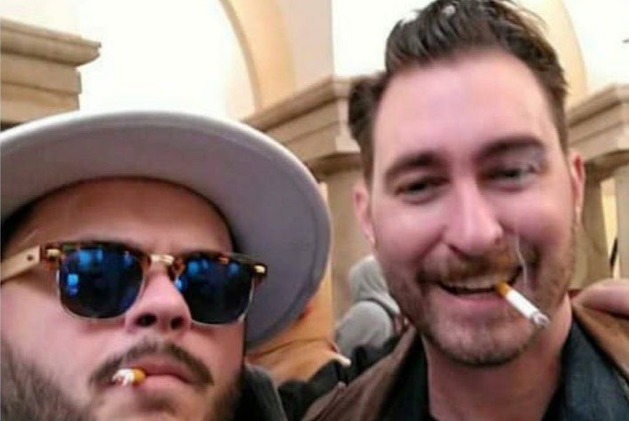 We’re still talking about the crazy attempted coup last week where thousands of Trump supporters stormed the Capitol Building in an attempt to stop Joe Biden from being certified as the winner of the 2020 Presidential election and it’s now emerging that a bunch of people who were involved in the incident are finally being arrested.

One of these is the leader of the Hawaii chapter of the Proud Boys, who uploaded a picture of himself smoking a cigarette inside the building along with a couple of his buddies. He was arrested on Friday and charged with unlawful entry into restricted buildings or grounds.

Ochs isn’t denying that he was involved – he uploaded a photograph himself FFS and there are many more of him available on the internet – but is claiming that he was only attending the riot as a professional journalist. Here’s what he said to CNN:

Hello from the Capital lol pic.twitter.com/H1Axdou708

We didn’t have to break in, I just walked in and filmed.

There were thousands of people in there — they had no control of the situation.

I didn’t get stopped or questioned.

Yeah, not sure if anyone is really going to be buying that considering Ochs’ reputation, but I guess it’s possible he’s telling the truth there. Still kind of a dick move to upload a video of yourself smoking in a government building during a riot so I don’t really think he can expect to not get into trouble here can he?

Gonna be interesting to see how everyone involved in the insurrection ends up being punished or whatever over the coming weeks as I don’t think I’ve ever seen anything like this happen in my lifetime before. The reaction really is going to be important if we want to avoid situations like this happening ever again.

For more of the same, check out this video of the Proud Boys violently attacking a couple in Washington D.C. Assholes.