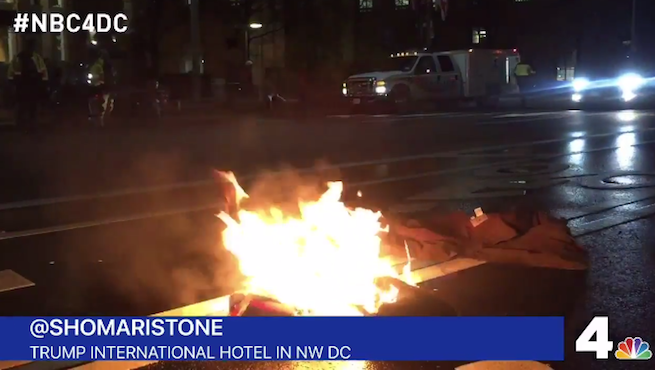 It’s the eve of Donald Trump’s inauguration and people still aren’t happy about it and seem to be turning to extreme measures to try and ensure their voices are heard.

One such character is an unidentified Californian man who tried to set himself on fire outside a Trump Hotel in Washington DC, in an event that I’m surprised isn’t getting more news coverage. The man was unsuccessful and the fire burned out, but when questioned why he did it, he said that it was a form of protest against a man who isn’t even capable of respecting the American Constitution.

Here’s an interview with the man, just after he was stopped by police, with footage of the attempted fire protest at the beginning:

Well, he does sound like a bit of a tinpot doesn’t he, but the mere fact that people are willing to set themselves on fire to protest Trump does prove that despite the fact that he was democratically elected, there are still a bunch of Americans out there who aren’t happy with it and are willing to potentially even die to try and stop him from getting into office. That’s a pretty big statement.

Unfortunately for this guy, he didn’t even succeed in setting himself on fire and barely any news networks covered it, so it seems unlikely he’s going to make a difference. Even if he had, nobody got his name so it’s not like he would have been remembered for it either. Unlucky mate.

Trump gets inaugurated tomorrow though everyone – that’s sure to be a laugh and have loads of unexpected twists and turns. It’s probably why he’s already booked the weekend off work. Smart move.