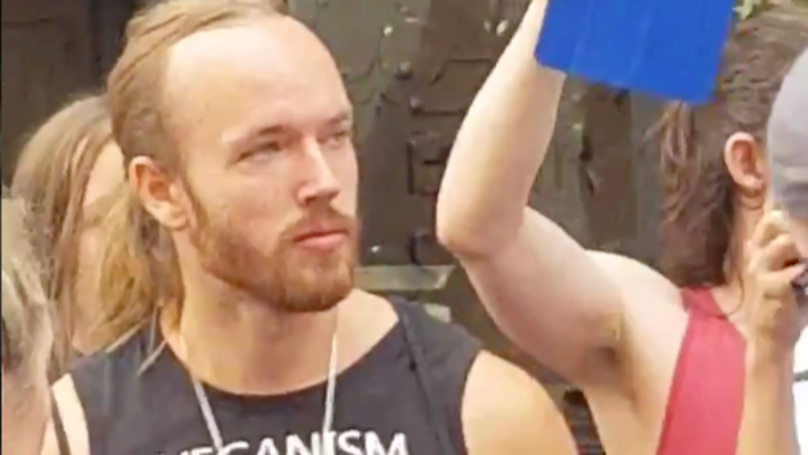 It was the same guy who recently ate the pig’s head.

I really think that the beef (deliberate) between vegans and non vegans is getting out of control following recent events as both sides seem to be showing no desire to let up with their extreme tactics in the war for the right to eat dead animals.

This story proves that things aren’t getting any better as over the weekend a non vegan protester was seen eating a raw squirrel at a vegan festival in London. He even took it a bit further by making his feelings fully known by wearing a ‘veganism = malnutrition’ t shirt too.

Incredibly, this dude is a YouTuber named Sv3rige (he looks like the kind of person who would have a name like that and think that it was really cool) and it was actually him that was eating the raw pig’s head at the vegan festival in Brighton a couple of weeks ago. Really seems like he’s got nothing better to do than rile up vegans which really is a lame way to live your life.

He explained why he felt that his protests were necessary:

We did it – it was eight of us – because veganism is malnutrition and you can’t get over 15 nutrients from plants and some of us are ex-vegans who got sick because of it.

Great. Apparently, Sy3rige was arrested on Saturday because of his actions although I’m not really sure what they would have charged him with as I don’t think eating raw animals in public is actually a crime, although I could be wrong. Either way. I’m predicting a lot more terrible content this year from this guy though as he attempts to single handedly (or perhaps with eight of his non existent mates) convince people that veganism is a bad idea. Good luck with that one pal.

To check him out eating the pig’s head, click here. Really weird banter.