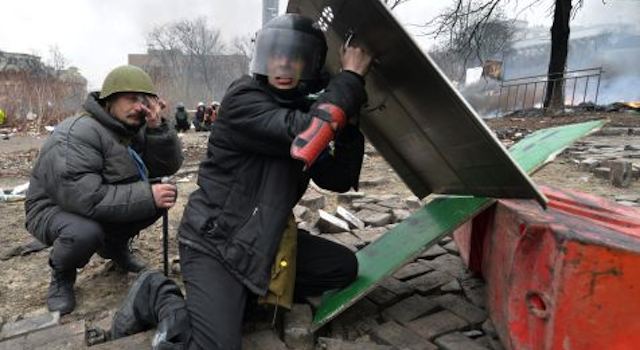 Another grim video from the Ukraine illustrates just how bad stuff is getting over there, as protesters are pinned down by Special Forces Snipers.

As you’ve all probably heard, the protests in Ukraine have been getting pretty out of hand in the past few days but this video illustrates just how bad things have really become over there.

It’s a video filmed by French photographer Jerome Sessini who is hanging out with some protesters and getting pinned down by sniper fire – allegedly coming from the Ukrainian Special Forces – in Kiev, near an area called Maidan. There are bodies lying around the area in puddles of blood and the protesters are protecting themselves with makeshift shields but Sessini was still unaware that they were actually being fired on with live ammunition, thinking instead that the snipers would be firing rubber or plastic bullets to subdue the protesters.

He later realised that it was live ammunition and subsequently filmed the scene you see below, which grimly illustrates the true horror and desperation of the protests occurring over in Ukraine at the moment.

â˜› More Snipers: Can You Spot The German Snipers Hidden In These Pictures?