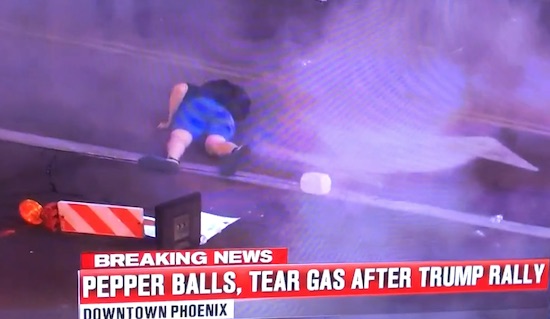 Protesting against anything is always going to come along with its dangers, but I don’t think anyone expects to endure quite so much pain as the guy featured in the video below.

The video shows a protester from Phoenix, Arizona, where an anti-Trump demonstration got out of hand and the police were ‘forced’ to tear gas everyone. This dude was fairly smart though and saw this one coming, so decided to bring his own gas mask with him to the rally. That’s good thinking.

He was trying to help the other members of the rally by kicking away the tear gas canisters so that they wouldn’t be affected by it, but the cops didn’t like that one bit and they resolved to take him out ASAP. In the video you see him clearly get hit in the balls by some kind of projectile:

Painful – we later found out that it was a pepper ball, which is a bullet filled with pepper spray.

Ouch, that’s gonna be absolutely horrific for hours. Gotta feel sorry for the guy as he was only trying to call out the cops for being complete assholes – he wasn’t being violent or dangerous or anything. Of course, that’s probably just typical behaviour for the cops in a place like Arizona. Sad.

For more pepper spray, watch these kids willingly get sprayed in the eyes for school grades. Seriously.