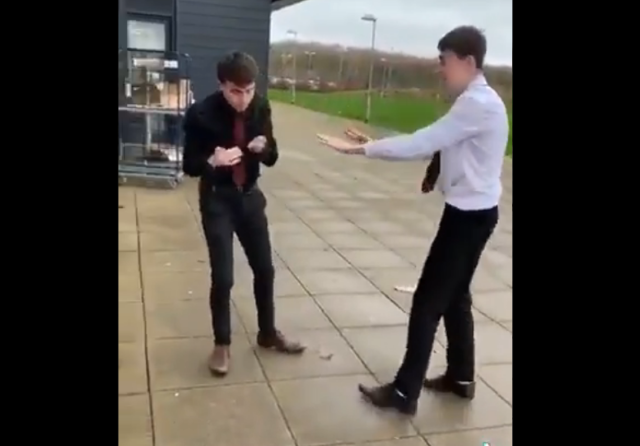 Surprised nobody was killed.

I don’t know where or when this footage was taken but it features two lads named Aaron and Jacob having it out in what can only be described as the most quintessential private school fight ever.

What do you reckon – will Dana White be giving them a call after this or what?

What in the private school is this pic.twitter.com/8OXOD1vq7Z

“Jacob, have a bang on my arm” – love it. Standard response when a scrap with your pal gets out of hand. Unfortunately we didn’t get to see that though because Aaron was too busy crying, even though he’s trying to make out like someone’s cutting onions and that’s why his eyes are watering, or something.

In all seriousness, this is actually heartwarming to see. It’s probably how fights between school students should end, rather than someone getting stabbed up or coming back with a bunch of baseball bat-wielding buddies for revenge. No harm done and even an apology at the end from the kid who apparently took it too far by… actually hurting his opponent? We can laugh all we want but it seems the beef is over. Good for them!

For an amazing video of two students fighting in the toilets while their classmate takes a dump inches away from them, click HERE. Oh to be young again.