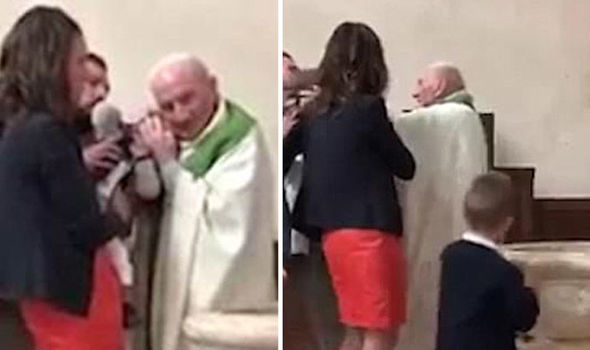 The French priest who lost his damn mind and slapped a two-year-old boy for crying during his baptism has been forced to retire.

Father Jacques Lacroix, 89, said ‘I am finishing my ministry now’ and that ‘there is an end to everything’. Probably for the best eh?

I know we’re generally supposed to respect our elders and especially a man of the cloth, but if this guy slapped my kid like that, I’d have to do something to him:

I’m not necessarily saying bodyslam him through the altar or anything, but I’m amazed the kid’s parents didn’t really react in any way. You’ve got to at least push him or give him a clip round the ear or something, even if he is an 89-year-old priest.

I mean it’s not as bad as this priest dunking a baby into the holy water like it’s some kind of Dorito dip:

But still completely unacceptable. Good riddance Jacques Lacroix – don’t let the door hit ya where the good lord split ya.

To read about the 103-year-old priest who is still desperately trying to lose his virginity, click HERE.