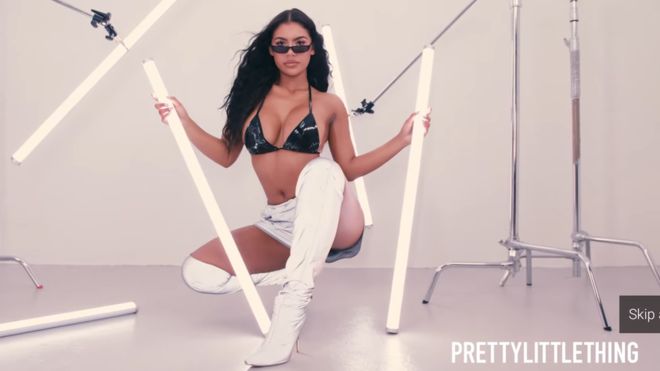 What’s the matter with this?

It’s fair to say that we’re in an edgier and racier cross section of society when it comes to advertising than ever before, but apparently highly sexualised adverts are still getting banned for some reason.

Case in point is the ‘Pretty Little Thing’ advert that you can see screenshots from on this page. The YouTube preroll advert was broadcast in October but after the Advertising Standards Authority (ASA) received a single complaint from a viewer they have now banned it from being shown ever again on the platform.

The ASA said that the advert presented the firm’s products in an ‘overly-sexualised way’ and depicted women as sex objects, as women posed in highly seductive and sexualised poses such as one wearing black vinyl, high-waisted chaps-style knickers. They said it was irresponsible and likely to cause offence.

I really don’t see what the fuss is all about though – take a look at the ad below and see what you think:

I mean is there really anything going on there that you don’t see pretty much every day on TV anyway? Can’t really see anything wrong with it myself, but maybe I’m a bit more woke than whoever works at the ASA these days.

Here’s the ‘Pretty Little Thing’ response, which echoes my sentiments (taken from the ASA website):

Prettylittlething.com Ltd stated that the ad highlighted how they supported and promoted diversity through bold and distinctive fashion of all shapes and sizes which focused on different trends.

They said they had not intended to create an ad which was deemed offensive and irresponsible.

They said they worked hard to promote a positive and healthy body image that was inclusive and empowered women.

Prettylittlething.com provided a mood board to demonstrate the creative theory behind the ad and explained that the ad was inspired by their customers who seek the latest rave style clothing.

Unfortunately, the ASA didn’t want to hear it and have upheld the ban. Completely lame but I suppose that’s what’s always gonna happen when you’re dealing with people that actually want to get jobs at places like the ASA and uphold what they’re saying. Squares.

For more of the same, check out Ulrika Jonsson’s banned advert for an over 50s dating app. Ridiculous too.