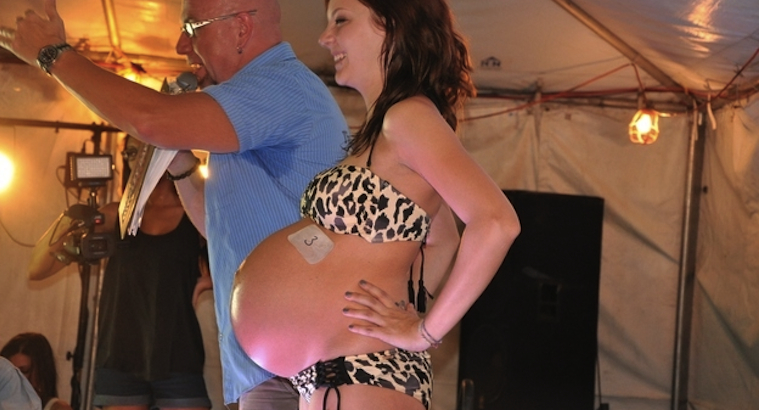 Down in Houston when you’re 32 weeks pregnant they don’t tell you stay indoors and prepare for the birth of your child, they enter you into a bikini contest. Gotta love Texas.

On the list of things that we’ve featured on Sick Chirpse that I’ve been like ‘why the fvck does that even exist?’ (see Failed Sex Toys, Brazilian Snake that looks like a penis, woman’s tattooed asshole, why did my boyfriend destroy his face etc etc – there’s a lot of stuff on Sick Chirpse you can get through if you’ve got a spare hour or so) this has to feature pretty highly on the list. Now, nobody would think it was weird if there was a bikini contest because everyone enjoys them (except for the fat bitches who don’t enter and get really moody about their fat boyfriends ogling the hot babes and their abs), but I do think it’s kind of weird that the bikini contest involves PREGNANT women who are in their third trimester, so you know they’re pretty far gone.

Now before we go any further I gotta make it clear that I’m not sexist or anything (if you don’t believe me check out this article I wrote about Tom Gabel coming out as transgender and becoming a woman) and I’m definitely not saying that pregnant women are gross or ugly or anything but I do think it’s kind of gross that they’re entering a bikini contest when they’re 32 weeks pregnant. Now I’m all for body acceptance and people feeling good about themselves but it seems kinda rank and inherently wrong for something like this to exist?

Am I being a bit too 90’s about this or are people with me? Normally I’m pretty liberal about things but this just seems kind of tacky to combat any issues women may have about looking pregnant through this method.But I’m not a woman so I guess I can never really know about that. I guess you gotta confront the mainstream to change stuff with counterculture stuff like this, the only problem is I didn’t even realise that there was a problem with the way anyone perceived pregnant women? It’s just something that happens when you’re gonna have a kid, it’s no big deal.  In any case, I bet half of the people that clicked on this link were only doing it to look at pictures of pregnant women in bikinis in kind of a bestgore.com way i.e. it’s freaky and gross but for some reason you can’t look away. There’s a bunch of those at the end of the article for all you freaks, don’t worry.

Anyway, the pregnant bikin contest takes place in Houston, Texas – it had to be the dirty south right? – and is in it’s 8th year. Of course the contestants have to prance down the catwalk in their best bikinis showcasing their pregnant bellies, but they also have to take part in several challenges – which I’m sure can’t be that good for the baby either – to decide who was the winner of the bikini contest. No, it isn’t all about flaunting that baby bump sister.

Challenges included speed diaper changing and tossing the diapers effectively into the trash. OK they weren’t that strenuous but I doubt they would ever really have to compete those tasks in a bikini. Still, I guess it is actually helping their parental skills in some small way. Of course they could just be practicing this stuff rather than entering a bikini contest, right? Eventually Jennifer Clay, 32 weeks pregnant, won the bikini contest due to her ‘grace,’ ‘presentation’ and ‘IT factor.’ Cool, with an IT factor like that while she’s pregnant maybe she’ll become a model once her kid is born.

Read Next: Why Covering Up Lad’s Mags Will Ruin A Boy’s Childhood

Anyway here are a few pictures from the pregnant bikini contest. Note how almost all the women involved probably live in trailer parks. Also note the bald compere with sweat patches under his arms – clearly someone has a thing for pregnant women huh, which might just explain why this contest began in the first place. Check out the photos on the next page.