A postman gets caught short on his round so decides to take a dump in a customer’s garden. As you do.

Most of us will have been caught short at some point – having to rush to the nearest public convenience, or even resorting to squatting in a bush – though most will attempt to keep some level of dignity even when having to embrace the great outdoors. One man in Oregon took it one step further when he decided to roll one up in someone’s garden. Well, when you’ve got to go, you’ve got to go.

A postman, whilst on his usual route to deliver parcels and packages to his beloved community, decided that the best place to ‘take the kids to the pool’ would be on the lawn of one of his deliver-ees. Unfortunately – or fortunately depending how you look at it – the owner of said tainted lawn was in the house and spotted the postman doing his dirty business. Rather than immediately addressing the situation and asking the postman ‘ERM, WHAT THE FUCK?!’ he grabbed his camera and took this photo. 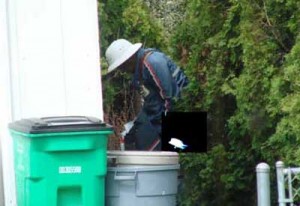 Now the postie in question has been suspended from his job, and hopefully given a thorough lesson in social etiquette, and perhaps bowel control?