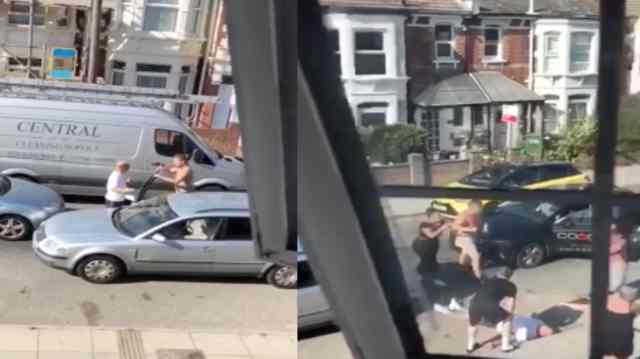 An argument last Friday over who had right of way down Stubbington Avenue in Portsmouth, Hampshire, resulted in one man being brutally KO’d and taken to hospital where he is still being treated for his injuries.

According to MailOnline, the shirtless man, a 30-year-old from Havant, has been arrested for assaulting the 43-year-old victim and has since been released under investigation:

And just like that – two lives changed in a matter of seconds. From the sounds of his head cracking the pavement it’s fairly likely the victim has picked up a serious injury and that the assailant is in big trouble for it. Just goes to show you should always avoid this sort of confrontation because you never know how dire the consequences will be.

As for who had the right of way, I think it’s the guy in the white top? Not that it really matters now. Also what’s with that person screaming “call 911″ at the end of the video? Don’t think that will be much use in Portsmouth mate…

For the 6’7” lorry driver who pulled a man out of his car and battered him for making the ‘wanker’ hand signal, click HERE.