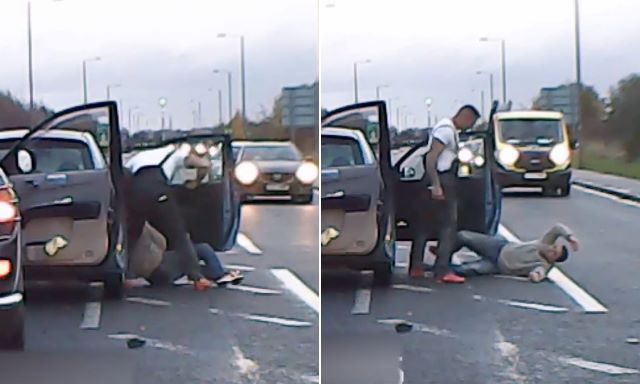 When you come across another driver who’s giving you problems on the road, it can be very tempting to stick up two fingers at them or make a ‘wanker’ gesture from the safety of your own vehicle.

But what happens when the guy you’re calling a wanker is a 6’7″ lorry driver who will think nothing of storming up to your car, pulling the door open and dragging you into the street for an impromptu beatdown?

That’s what happened to the driver of this Nissan Micra in Barnsley, South Yorkshire, recently after a near-miss at a roundabout:

The driver who recorded the incident told MailOnline:

His victim had apparently given him the w***** signal as he went round a roundabout.

When we eventually caught up with him we couldn’t believe what happened.

It was said to me by a long serving member of South Yorkshire Police that having viewed it, this is the worst incident of road rage ever captured on video.

Can’t imagine how badly the victim pooped his pants when he saw the size of the guy he’d just flipped off. Probably the second worst decision he ever made, after actually pulling over and allowing this lunatic to walk up to his car and yank his door open. Lesson learned.

The assailant, 44-year-old Stephen Carr, was jailed for 16 months and handed a 20-month driving ban.

For the road rager who threatened to break a man’s kneecaps and ended up being KO’d in beautiful fashion, click HERE.