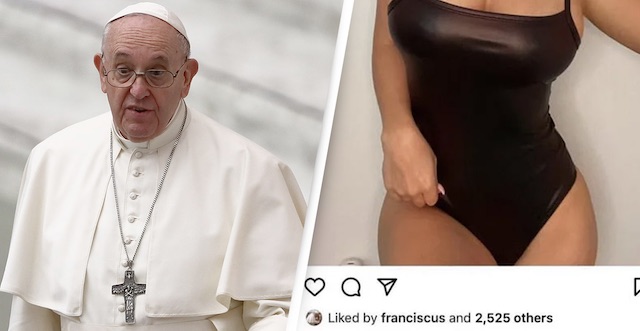 There haven’t been few moments of pure respite this year, but one of this was definitely when Pope Francis was caught liking a model’s photographs on Instagram – and now he’s done it again.

This time, the lucky lady is self professed ‘tiddy queen’ Margot Foxx, who produces risqué content for OnlyFans. A screen grab of Francis’ account liking a picture of Foxx in a tight black swimsuit was doing the rounds on social media and was eventually picked up on by Foxx herself, who decided to tweet the following:

Yep, there ain’t no denying that one is there, although I suppose you could argue it’s a PhotoShop? It does seem kinda ridiculous that whoever is in charge of Pope Francis’ social media accounts would screw up so obviously in the same fashion twice – or that they haven’t been fired after the last instance – but I think most of us know how easy it can be to mess up your social media accounts. Even so you think they would be on their best behaviour after the uproar it cause last time. Very sloppy.

For more of the same, check out the investigation into the original incident. Can’t have cracked the case there can they?