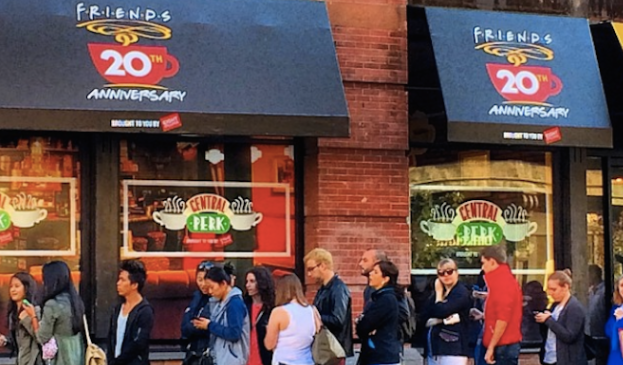 Could it be any more busy in this joint?

I can’t decide if this is unbelievably cool or unbelievably lame but it probably lands somewhere firmly in the middle of the two (kind of like the Dumb Starbucks prank earlier this year)  because however way you look at it Friends is actually kind of cool but also kind of lame. I’m pretty sure nobody reading this can deny that they’ve ended up watching an episode on TV when there’s nothing else on and ended up enjoying it. Recently I was on a plane in Brazil and Friends was the only thing both me and my buddy agreed was worth watching, and it ended up being hysterical. Ok admittedly we were both wasted, but you get the picture.

They had some real special surprises in store for the first night though, as none of the starring cast turned up but they instead got Gunther and The Rembrandts (who sang the theme tune in case you didn’t know) to turn up and play a show. Wow. Can’t believe I missed it, and I’m sure you can’t either. The good news is that it’ll be around for another month, but expect lines to be even bigger than they are at Starbucks. I guess it’s the next best thing now that rumours of a Friends reunion have been firmly crushed.