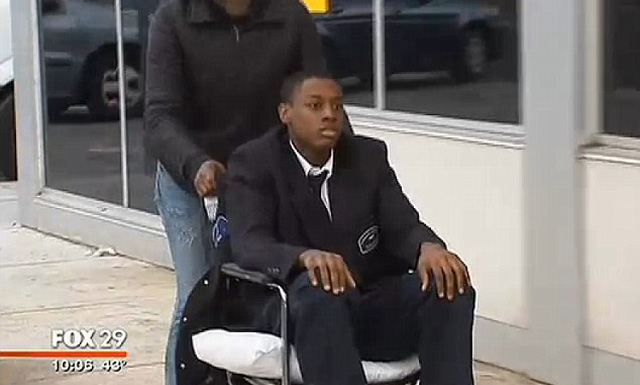 A 16 year old kid from Philadelphia is currently unable to walk or potential procreate after he was arrested and underwent a stop and search that resulted in his balls basically being raptured. Ouch.

This is an odd one for sure. A 16 year old kid named Darrin Manning from Philadelphia is currently unable to walk or potentially procreate after he was arrested and underwent a stop and search that resulted in his balls being ruptured. Ouch!

The kid claims that the frisking-cum-assault, which was performed by a female police officer, happened after the school basketball team (of which he was part of) had exited a nearby subway station on their way to a game. Darrin explains in the interview below that he was handcuffed and then the officer grabbed his butt before he heard and felt an audible pop. He was then detained for 8 hours before spending the rest of the night in hospital to undergo emergency surgery.

Now firstly, I am unsure as to how a female police officer was allowed to carry this out on a young male let alone why they were stopped. The principal of his school, who had been with them only 10 minutes or so prior, said that the team were wearing scarves over their faces to protect themselves from the effects of the polar vortex, offering up this information up as a wild stab in the dark to perhaps why they were approached for ‘suspicious behaviour’. Although it’s not nice having to bring race into stories like this, it’s certainly a feasible theory that could explain how the situation came about. Were these kids profiled? Is it not possible to be cold if you’re a black male? Do extreme weather conditions blur the lines between using fashion accessories for mischievous anonymity and face-blocking insulation?

The reason for the stop is still unknown; Doctors have told the kid he may not be able to father children and the police are pressing charges for aggravated assault and resisting arrest. Their response on the alleged sexual assualt is that he didn’t complain of any injury during his whole detainment.

If the law had just squeezed my balls so hard that they broke, I might not trust telling them either. Heck, they already didn’t believe he was cold, not suspicious, going to a game etc. so why would they suddenly heed that? Hopefully the charges get dropped and he can follow this through as he seems like a genuinely nice kid.