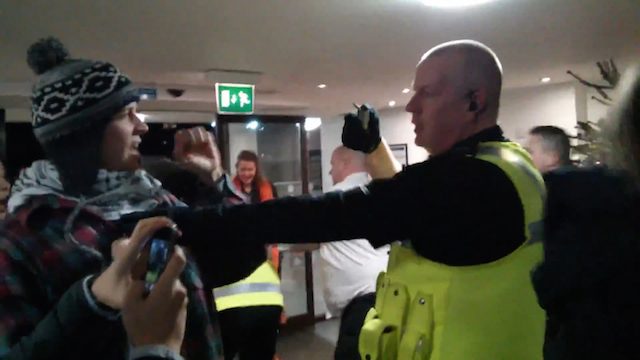 Was this really necessary?

A peaceful sit in protest at Warwick University over the high price of tuition fees was interrupted with disproportionate force by the police yesterday, who manhandled those involved as well as using CS gas on them and threatening (possibly actually using) a taser on them.

The sit down protest was organised by WFFE (Warwick For Free Education) and took place in the Senate House at Warwick University. The students were all standing around peacefully and weren’t blocking any doors or being a safety hazard, but the police still sought to respond in force with several police cars, a riot van and a police dog showing up.

After the protestors refused to move and linked arms, the police got violent, using CS gas and manhandling the students. Many were dragged to the floor, grabbed by the throat and even kneed in the face as the police attempted to get them out of the building. Here’s what one of them looked like after being pepper sprayed:

Photo of warwick student after being CS Sprayed in the face #freeEducation@WarwickFreeEdpic.twitter.com/j8ALyyFExj

I’m sure most people would agree that this was a disproportionate reaction from the police for what was happening there and then. Playing devil’s advocate, you can perhaps understand why the police used these methods if the students refused to move after being told to do so, but in reality if they weren’t actually doing anything that bad and weren’t harming anyone, why did they have to move in the first place and why did the police resort to such measures to move them along?

Was it really necessary? All they’ve probably achieved is to raise more awareness for the organisation and their aims, as well as highlighting how inadequately they’ve been trained to deal with situations such as these. Nice one.

At least they didn’t go as crazy with the pepper spray as this policeman did though.