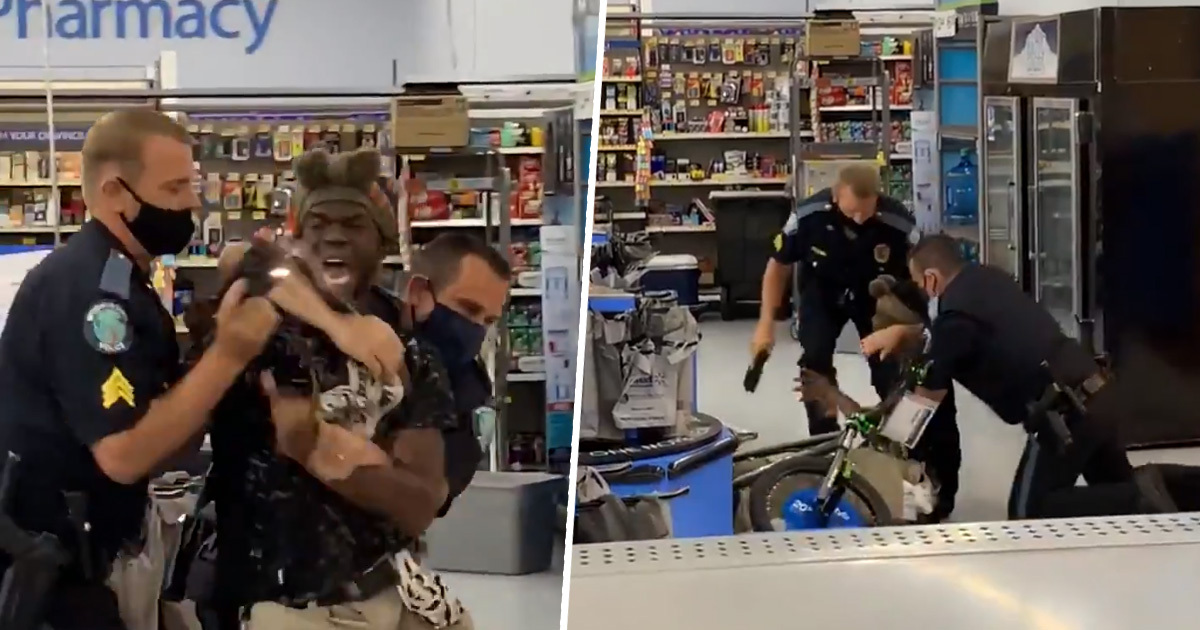 He was just trying to buy a bicycle.

If you wanted to know if all the Black Lives Matter stuff from the last few weeks was making a difference, then from first look at this video it looks like it hasn’t achieved anything at all.

The video comes from a Pennsylvania Walmart where a black man named Stanley Gracius is arrested and tasered with force after a complaint that he was riding his bicycle through the store, playing loud music and being offensive to shoppers. Others contest this, saying that he was test driving the bike, playing music and being polite and nice to everyone who came into contact with him as he rode through the store.

Either way, it seems like as the police arrived he was purchasing the bike and had a receipt for it, so there was no real reason for the police to act like how they are in the film. Take a look at the footage and see what you think:

the kind man was test riding a bike through the store while playing some music and telling random strangers he hopes they have a great day and complimenting them. he was absolutely no bother to anyone. at the register when the man was paying for the bike, the officer grabbed (2)

happening. then he was tazed continuously which is when the video starts. there was no use for the tazing as he was calmly trying to reason with the officers. after a few minutes he was taken outside and was forced into a cop car where he started to resist because he still (4)

bystanders when we asked why he was being arrested. finally at the end, an officer whose name tag i was unable to see, only said “disorderly conduct.” tell me why a man who was ABOUT TO LEAVE THE STORE had to go through all of this at CHECKOUT. if he was bothering people (6)

lastly, there were FOUR OR FIVE cop cars outside. for what? but they did this for what? the last officer to leave overheard my conversation with another bystander about how ridiculous this is and he scoffed and said, “you have no idea” and then drove away. (8)

I mean everything she’s saying there is spot on because even if this guy was being a nuisance, there’s absolutely no need to treat him like this. He clearly has no idea what’s going on from the way he’s speaking and I hate to say it, but I’m fairly sure if a white person had been doing the same thing then it would have all been resolved with a quick conversation.

So stupid how shit like this is still going down, but it’s important to share it so it stops. For real.

For more of the same, check out this young mother who was shot dead after saying ‘All Lives Matter’. It goes both ways.