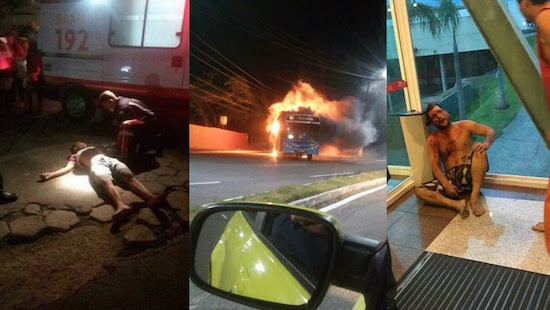 ‘The Purge’ in real life.

‘The Purge’ has been a surprisingly successful movie series which tells the story of what happens when all crime is legal for a 12 hour period in the not so distant future. Despite its success, I didn’t think that real life would be imitating these movies any time soon. Unfortunately, it turns out that I’m completely and utterly wrong.

Over in Catarina, Brazil, the police force have decided to go on strike due to the fact that they haven’t been paid for months thanks to Brazil’s worst recession on record. The city has since devolved into a lawless mess amidst a wave of violence that is already believed to have included at least a dozen murders.

On Monday the Brazilian President sent 200 troops into the southeastern state of Espirito Santo to try and sort it out, but to no real avail. Schools are closed, football matches have been cancelled, shops are getting looted and people are afraid to venture outside because the conditions are so terrifying and dangerous.

You can see some of the ‘highlights’ in the videos below:

Christ, that does not look good, does it? I hope the military police can sort it all out. I mean look how completely fucked up everything is over there and that’s only about 8 or 9 videos. The actual situation is probably way worse than that. I actually am going to #PrayForEspiritoSanto like they suggest. Jesus.

For more riots, check out the five most violent riots of all time. At least they’re not that bad.