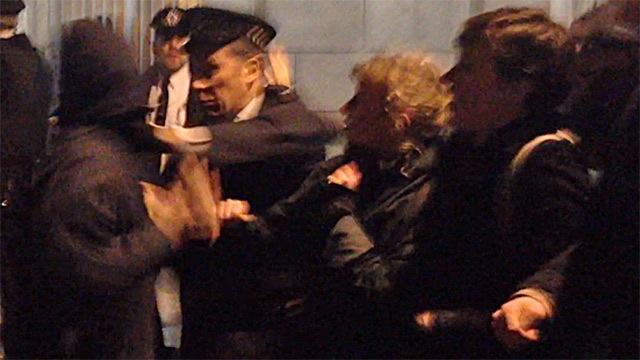 Video footage of a police officer punching a student in the face at the University of London protest on Tuesday.

Well, I guess you can call those punches. A police officer takes a couple swings at a protester during a student occupation at the University of London’s Senate House on Tuesday. The students were protesting against private sector funding of the uni, staff pay and plans to close the student union building.

The demonstrator who was punched said “Nothing was said, the police were trying to clear the crowd of people. I turned my back to kind of walk away, he pushed, I kind of turned to see who it was — why are you pushing me?”

“The punch came and I went straight to the floor, then I got up and left.”

When asked if he would take action against the cop: “What can I do? Look how many of them there are. If I go up to that one officer they’d all just grab me again” (He may have misunderstood that question).

Another student claimed she was pushed over by officers and had her glasses smashed. She said police officers were “punching people indiscriminately”.

One student/protester was arrested — no news on if any of the police officers will be disciplined but we’ll keep you posted.

â˜› Watch This Next: Police Brutality At Ukraine Anti-Government Protests This Month