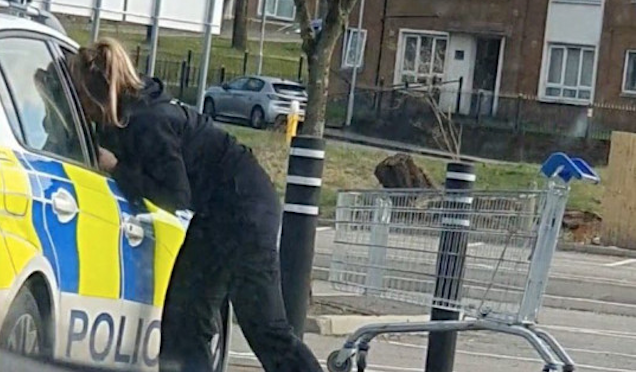 Everyone has someone that they actually get on with in their workplace and sometimes this leads to sexual fireworks, but it’s usually important to keep these quiet and under wraps from everyone else in the office and I suppose this is why two police officers have been filmed making out in their patrol car at Tesco for 20 minutes.

The footage was caught on camera at the Tesco car park off Carl Fogherty Way in Blackburn on Good Friday. The passionate little rendezvous appeared to be pre planned as the female officer arrived in her own car to meet the guy, she then pulled up alongside his car and started talking to him with their respective windows down before heading into his vehicle for the makeout session.

After roughly 20 minutes were up, she returned to her own vehicle whilst stopping by his window to kiss him on the way back. Here’s what the witness who made the video had to say about it all:

Initially they were in their own cars. They pulled up next to each other and were talking from car to car. She then got out and got into his car.

They were kissing in the car – their faces were colliding. They were sat in the car for about 20 minutes.

This is an on-duty police officer sitting in a car for 20 minutes doing b***** all.

It annoyed me. People were walking past and taking a double look into the vehicle and thinking ”Is that really happening?”

They were laughing and joking and kissing. I don’t think they should be doing it on police time, even if he was on his lunch break it looks bad.

They were there for a long time – all in all about an hour if not longer. That’s what made me think it couldn’t be a lunch break.

It’s a big town, there will be a lot going on, enough for them to do. People are getting burgled and they don’t bother going out to them.

Yeah, the guy is right that it isn’t a good look for them, even if only one of them was on duty. I suppose it’s no difference to a couple shagging in the closet/toilet at the office for 20 minutes every now and again though is it, except it’s much more in the public sphere and therefore much more damnable.

I guess you also have to question whether or not these officers were dating or having an affair as it seems very loved up/horny for them to have to spend an hour/20 minutes in a patrol car snogging each other hard when it’s very easy for them to see each other after hours or at home. Just saying what everyone’s thinking.

The police released a statement saying that the officers were spoken to and have apologised for their conduct. So basically it looks like they got a ‘stern telling off’ and that was it. Typical. I guess we got to see some kind of hot police action though at least?

For more of the same, check out this Chinese dude kissing an angry policeman on the lips. How do you think that worked out for him?