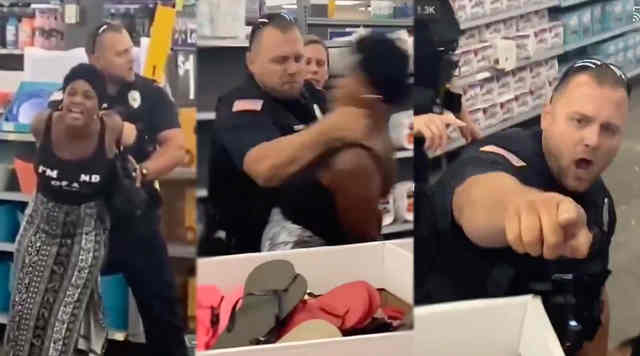 It’s never a great idea to bite a police officer when they’re trying to arrest you, but does it ever warrant a right hook to the face?

For context – the woman was being arrested for fighting/pepper spraying people in a local Walmart. Watching that footage it already looks like an extremely tense situation involving loads of people, without also having to deal with a suspect biting you in the middle of it all. I mean we’re all anti police brutality/abuse of power and all the rest of it, right? But is it crazy to say this lady had it coming? You might say he could’ve skipped the punch and thrown her onto the floor instead, but when someone sinks their teeth into your arm like that you kinda have an instinctual reaction to strike back.

Conclusions about whether the actions of the officers are consistent with department policy and the law will not be made until all facts are known and the investigation is complete.

To watch a handcuffed student headbutt a police officer and get tasered into oblivion, click HERE. I think he had that one coming.