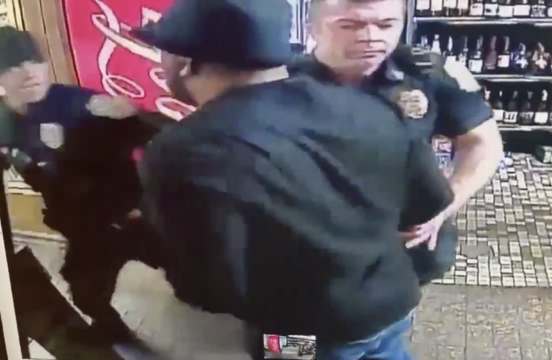 Another day, another instance of police brutality in America captured on camera, as police responded to a call about a store robbery by attacking and arresting the black owner instead.

The footage was obtained by NBC affiliate WAFF and shows officers enter the store in Decatur, Alabama, with their guns drawn. Because the store owner was armed, they thought he might’ve been the suspect, even though he already told them he was holding the thief at gunpoint. In fact he put the gun away on the counter but still had a magazine clip in his hand, which the police mistook for the gun itself. So they ended up punching him in the face and arresting him:

Here’s another look from the police body cam:

47-year-old Kevin Penn, the store owner, suffered a broken jaw and lost some teeth and is now planning to sue the department.

Meanwhile Decatur Police Chief Nate Allen said during a press conference this week that his officers reacted to seeing a gun in the store owner’s hand:

That’s what caused the immediate charge of the officer.

I’d much rather have a punch than an officer-involved shooting.

So if I’m understanding this correctly, they were 99.9% sure this guy was the store owner, but they were scared he was going to shoot them and that’s why they pounced on him? I mean I get that cops might be paranoid and hyper-vigilant at a time like this in 2020 but come on. Surely there’s no way this situation should have ended with the store owner in handcuffs and with his jaw hanging off his face. They really need to sort themselves out over in the States.

P.S. The actual robber was also arrested shortly after. Yay?