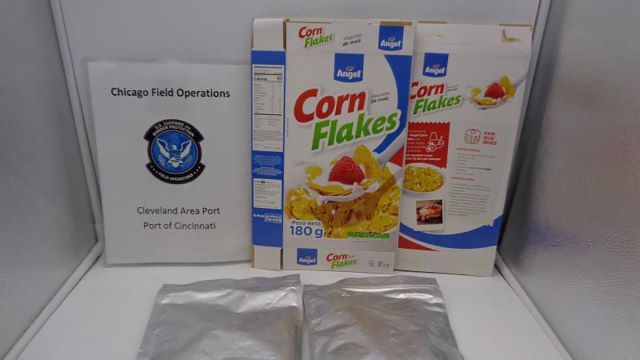 US Customs and Border Patrol in Ohio have revealed this week that they seized a shipment of Cornflakes that was covered in cocaine instead of sugar, and worth more than $2.8m (around £2m).

Authorities said they’d intercepted 44 pounds (around 20kg) of the stuff which had been shipped from South America and bound for a home address in Hong Kong.

As per The Independent, the cocaine-covered cornflakes were discovered when a narcotic detector dog named Bico alerted agents to a large shipment of cereal while working incoming freight from Peru.

When officers opened the box to take a closer look, they saw that the cereal contained white powder, and the flakes were coated with a grayish substance.

That’s not Frosted Flakes—CBP K9 “Bico” sniffed out 44lbs of cocaine in a shipment of cereal originating from South America. https://t.co/IUHgcVtxz5 pic.twitter.com/iEzcqx7OuG

Well I’m not sure how they planned to separate the cocaine from the cereal had the cornflakes got to where they needed to be, but I’m sure they’d thought of something. What I don’t get is why 44lbs of cocaine being shipped from south America to Hong Kong had to pass through north America? Isn’t that a way riskier route than it needs to be?

Maybe the real giveaway was that someone was shipping 44lbs of cornflakes in the first place. I mean, cornflakes are the blandest, most tasteless cereal around. Nobody is shipping that amount to a home address in Hong Kong FFS. Unless… you sprinkle a little bit of sugar/cocaine on them. Then you’ve got yourself a breakfast that’ll really wake you up in the morning.

Well anyway, major bummer for the guy who was expecting his $2.8m shipment worth of cocaine cornflakes to come in. I know a couple ladies who would definitely have been interested in a sample. Maybe next time.