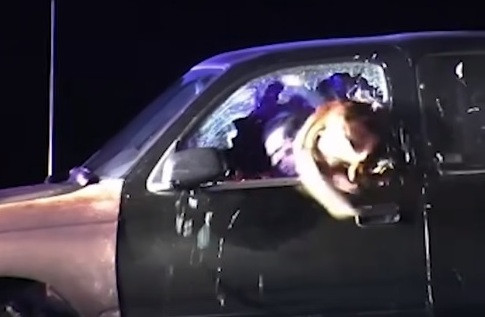 Give this good boy a Christmas bonus.

A police dog in Fontana, California put on an absolutely beautiful display of skill, bravery and athleticism when taking down a stalking suspect in his car this past week.

Police were called to the area late on Friday regarding a stalker and were then led on a pursuit where they deployed spike strips and used a PIT maneuver (spinning the car sideways using vehicular contact) to bring suspect Julio Vasquez to a stop.

They then shot out his window with rubber pellets before allowing the K-9 to do its thing:

Police used a K-9 and shot rubber pellets to take a stalking suspect into custody after the end of a chase in Corona. Full video and more details: https://t.co/nxMHlbaDM2 pic.twitter.com/R3NWzr30wM

Love to see it. No sympathy for the scumbag driving as apparently he had violated a restraining order against his estranged wife by showing up to her work earlier in the day and trying to run her over with his truck. He may also face additional charges after punching the K-9 (death penalty IMO).

Vasquez was taken to hospital to be treated for minor injuries – guess who didn’t have to go to the hospital? The dog. What a good boy indeed.