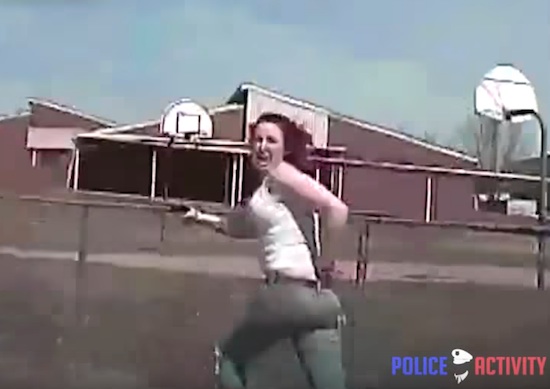 One of the best parts of the GTA franchise is how you can just run around the city shooting people and blowing stuff up if you feel like it, and a lot of the time you’re going to get away with it if you know what you’re doing.

However, if you’re on foot then there’s always the chance that a police car might end up running you over, and it turns out that the same problem is prevalent in real life too if you try that sort of thing. A woman named Madison Dickson was on a shooting spree in Tulsa, Arizona and tried to shoot three strangers and a bunch of cops.

Her actions were deemed so dangerous that the cops had no other option but to run her over:

Not sure if that was really necessary, but she does quite clearly have a gun and you can hear shots going off so it’s more justifiable than a hell of a lot of the stuff you see going down on police dash cams in the states. Dickson was apparently a career criminal in the area too, with several warrants out for her arrest including several shootings, which again makes these actions more justifiable. Still not really that cool though – I’m sure there was another way she could have been detained.