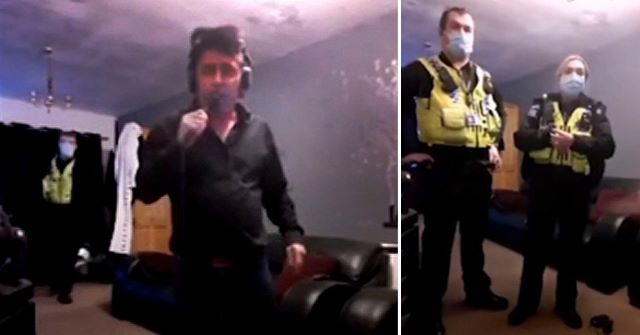 An Elvis impersonator from Leeds who was doing a karaoke livestream had his performance interrupted by police who broke into his home and arrested him.

Dean Holland, 46, was putting on an electric display for his fans and because of the music blaring in his headphones, didn’t notice police knocking at his door for the last 20 minutes. Hilariously, he charges at one of the officers as soon as he realises he’s not alone:

West Yorkshire Police refused to comment to Metro on the reason behind Dean’s arrest, but in September last year he had been fined £9000 after neighbours complained about his late night singing.

He had been served a noise abatement notice by Bradford council but disobeyed the order and was summoned to court.

Dean told the BBC he performs for fans in the US, meaning he often sings in the early hours of the morning due to the time difference:

I don’t do it every night, I might do it like twice a week, three times a week.

I have sung at 11pm, midnight and 1am, but it’s not banging out and it’s not like grunge music or AC/DC or anything like that.

2 or 3 times a week? Once a week would be annoying enough to be fair. The funniest part is he could do a streaming performance with music plugged directly into stream, with just his voice heard on this side of the pond, which would have solved everyone’s problems. Doesn’t come across as the most technologically gifted person, though.

Anyway, I’m guessing his neighbours snitched him out after having had enough of his late night performances. I just hope the police said “Elvis has left the building” as they escorted him out of his house. If not, what a missed opportunity.

For the driveway singer ‘raising morale’ during lockdown who was devastated to receive a noise complaint by annoyed neighbours, click HERE. Poor guy.