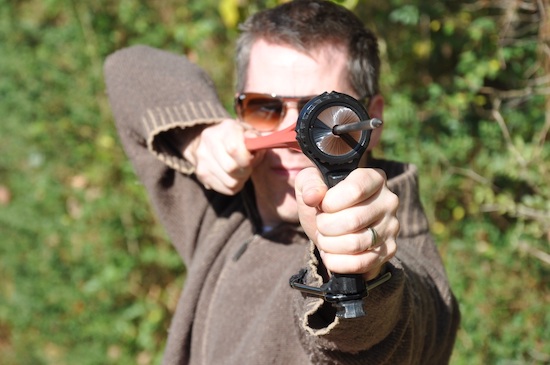 Back in the 90s when The Simpsons first came out, every kid wanted a slingshot. But when you actually got one you realised that it was a lot harder to use effectively than Bart Simpson made it look. So unfortunately nobody carried one around in their back pocket and they probably all just ended up in the back of the drawer somewhere. So it goes.

This might all be about to change though with the advent of the pocket hammer, which is being described as the next step in the evolution of the slingshot. The pocket hammer is tiny enough to fit in your pocket, but powerful enough to fire an arrow at 350 feet per second. It’s a son of a bitch basically – check out the video below:

Lol – I love it when the guy is sneaking around in the trees and then pops up to fire at a can. Why the heck is he sneaking around? It’s just a fucking can.

Anyway, the pocket hammer looks like a serious bit of equipment and if you do get one, you’re probably not gonna be using it to stick up for yourself against the school bully as you might end up killing the guy. Just use it to show off to girls or make bottles explode.

For more slingshots, check out this human slingshot that catapults base jumpers from 0-130mph in one second. Rapid.