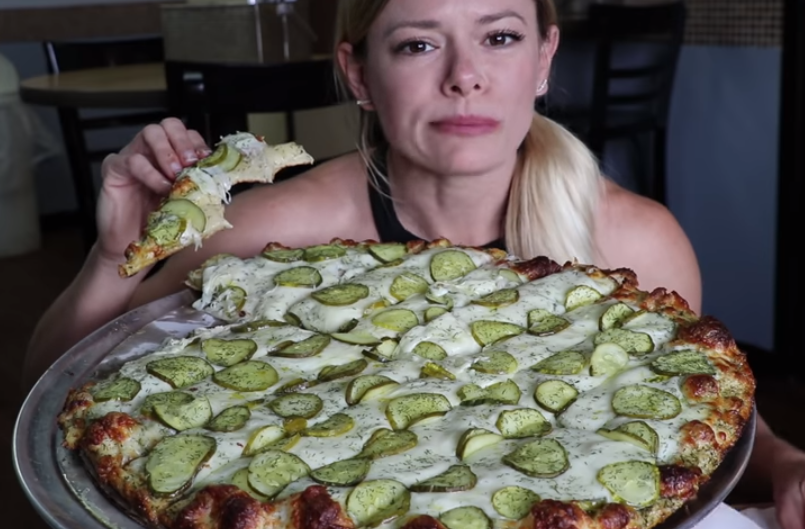 Pickles seem to be one of those food items that thoroughly divide opinion – you either love them or hate them – and as such the idea of having a whole pizza covered with them is probably going to be even more controversial. This is the concept that the QC Pizza pizzeria in Mahtomedia, Minnesota has decided to run with though and it might not seem as crazy as it sounds to begin with when you hear their reasoning.

Apparently there’s a snack in Minnesota called ‘Minnesota Sushi’ that’s created by taking a pickle spear and slathering cream cheese around it. A slice of ham (or luncheon meat) is wrapped around the cheese-covered pickle. It’s then cut into slices and served as a bite-sized snack.

Sounds pretty nice except for the pickle part I guess, but anyway the QC Pizzeria decided to try out this concept on a pizza, starting with with a base layer of garlic dill sauce on crusty dough. This is followed by by a layer of homemade Canadian bacon which has been smoked for 48 hours and then topped with a layer of fresh pickles. Then finally the pizza pie is caked with a generous layer of mozzarella cheese, another layer of pickles and yet more dill. Holy moly!

Again, sounds kinda nice except for the pickles. Here’s a video of it in action, although it’s 25 minutes long so maybe you’ve got better things to do than watch all of it – just giving you the heads up:

Yeah again, I’m no big fan of pickles so I just can’t really get around how rank this makes me feel. The bacon, garlic and cheese pizza pie sounds completely sick though but I suppose that’s hardly that original. Just don’t see why the goddamn pickles have to overrun it all and ruin everything. Completely rank.

For more of the same, check out this restaurant that has created a sandwich that uses pickles instead of bread. What the actual?