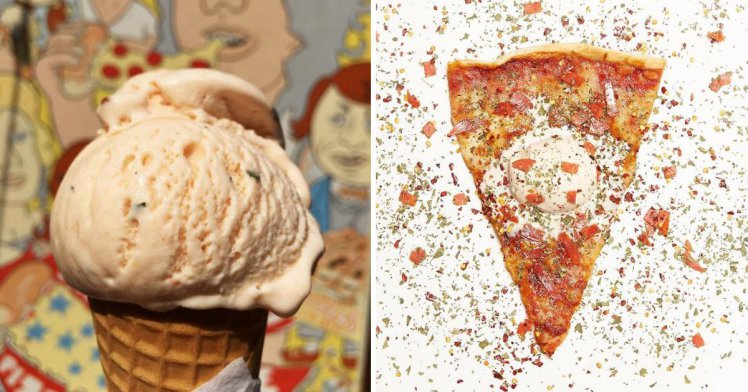 All kinds of wrong.

Not content with the recent explosion of flavours in the ice cream world from your standard strawberry, vanilla and chocolate to such luminaries as caramel chew chew, chocolate cookie dough and vegan cookies ‘n’ scream, the ice cream industry has decided against resting on its laurels and has now developed the flavour that you never even knew you wanted – pizza flavoured ice cream.

Philadelphia’s Little Baby’s Ice Cream have decided to pioneer this flavour by using tomato, oregano, basil, salt and garlic, effectively making it taste like a margarita. The pizza place even recommends that you have the ice cream on an actual slice of pizza, although you can just get it in a cone like normal if you so desire too.

I mean, I suppose I’m intrigued by this idea and if I lived in Philadelphia I would probably go and check it out if I was in the area, but in reality it’s obviously going to taste gross. I just don’t really think pizza and ice cream go together. And having a pizza flavoured ice cream as a topping on an actual pizza is pure sacrilege.

Fair play to the guys for trying though. I’m sure we’ll see this in Shoreditch sooner rather than later so we can try it ourselves anyway. Maybe it’s better than fried chicken ice cream?