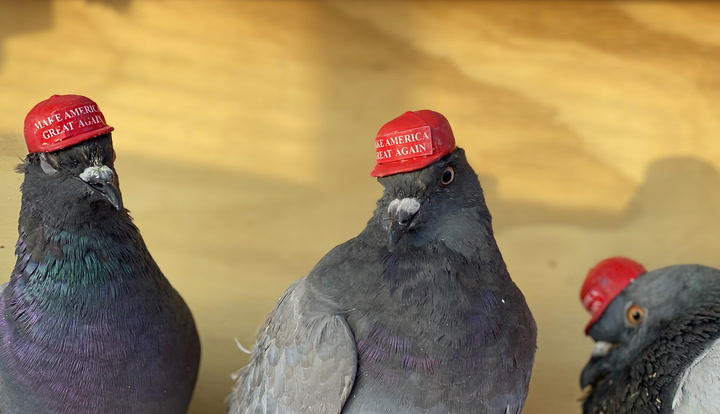 You probably remember a couple of months ago when we posted that someone was sticking little hats on pigeons in Las Vegas and it seems like they’ve continued their campaign as now some pigeons out there have been spotted with MAGA hats on and Donald Trump hair.

The pigeons this time are said to be part of a group named Pigeons United To Interfere Now (PUTIN), whose members have made a YouTube video of themselves releasing the birds to stage an aerial protest about the Democratic debate that went down in the city last night. The group is led by a shadowy character named Coo Hand Luke, who had the following to say about this silly little stunt:

The project was the result of months of exhaustive research, logistical hurdles and pigeon care taking.

The release date was also coordinated to serve as a gesture of support and loyalty to President Trump, who is scheduled to arrive in Las Vegas just ahead of the Democratic Debates, for a speech scheduled at The Las Vegas Metropolitan Police Department headquarters.

As for the pigeons, we wash them with Dove [detergent] and get the grease off that usually accumulates from being underneath cars or near grease traps at restaurants while they’re looking for food.

A lot of the time they are found with stringfoot, and we nurse them back to health. A lot of them are malnourished, and we feed them a variety of seeds.

The hats usually stay on for a day or two, depending on the bird’s movements. We can also remove them ourselves as they fly back to the coop. They could be gone for a day, two days or a week, but they always come back.

I mean I suppose it’s good that they’re trying to look after the pigeons, but they could just not do this in the first place and it would probably have the same effect i.e. absolutely nothing. Really weird banter.

It’s not known if they’re associated with the other pigeons that were found with red sombreros on their head in Las Vegas a while back and roundly condemned as they had been superglued on. Not sure if the culprits were ever found.