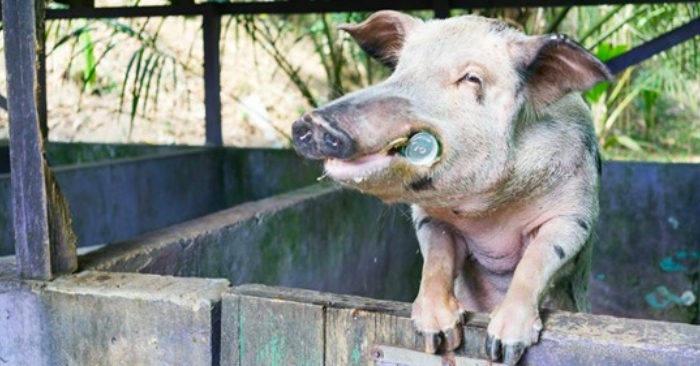 I generally don’t think of pigs as the kind of animals that wanna get wasted and fight, but then again they do like to roll around in their own filth all day so maybe they do – this one is certainly perpetuating the stereotype though.

The story actually comes back from 2013 but seems to be doing the rounds again. It concerns a bunch of campers who woke up in the middle of the night at Port Hedlund in Australia. They had left their beers out as they didn’t figure anyone would be around to steal them but unfortunately a wild pig had stumbled across them and decided to down them.

Here’s what one of the campers who witnessed the theft had to say about it:

It was in the middle of the night, and it was these people opposite of us and I heard this crunching of the can, and they got their torch out and shined it on the pig and there he was, crunching away at their cans.

Then he went and raided their rubbish…then there were some other people camped right on the edge of the river, and they saw him running around their vehicle being chased by a cow.

Apparently, the pig showed up several nights in a row, causing chaos and helping himself to anything he could find to “pig out” on.”

I mean fair play to the guy – if I was hanging out somewhere and someone left a bunch of beers out I would probably help myself to one. Finders keepers losers weepers.

It didn’t end well for the pig though. After a few nights of passing out on a tree by the local river after his daily rampage, he was accidentally run over by a speeding truck when he attempted to cross the road in his inebriated state. RIP little guy – let this be a lesson to anyone who’s constantly going out and getting wasted every night. Your number might be up sooner than you think.

For more of the same, check out this story about a woman who got eaten alive by her own pigs. Savage.