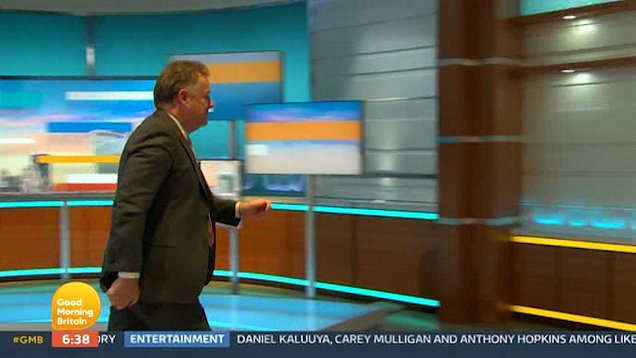 It’s been a tough morning for Piers Morgan already, as not only are people reporting him to Ofcom over his behaviour concerning Meghan Markle, but he’s now stormed of his own show after a co-host called him out over his actions regarding her during the last couple of weeks.

Sadly it wasn’t Susannah Reid that finally stood up to Morgan, but instead weatherman Alex Beresford who said the following causing Piers to get up and walk off in a huff:

They’ve had an overwhelming amount of negative press…

I hear Piers say William has gone through the same thing but you know, siblings experience tragedy in their life and one will be absolutely fine and brush it off and the other will not be able to deal with it so strongly and that is clearly what has happened with Harry in this situation.

He walked behind his mother’s coffin at a tender, tender age in front of the globe. That is going to shape a young boy for the rest of his life. So I think that we all need to take a step back.

She’s entitled to cut you off if she wants to. Has she said anything about you since she cut you off? I don’t think she has but yet you continue to trash her.

Unbelievable scenes. Not really sure why anything Beresford said was so offensive to Morgan that he genuinely had to leave the room, but it does bring up a curious duality with the whole Meghan Markle situation, as she had to leave the country because the media criticism she was facing became too much for her. Think about it.

Also completely nuts that Morgan can do something like this and not really face any criticism/backlash/consequences, but I suppose we’ve all realised that he’s bigger than Good Morning Britain now so that’s that. Even with the potential Ofcom investigation it seems like nothing’s ever gonna change. Another Jeremy Clarkson situation.

For more of the same, check out Morgan completely rinsing Matt Hancock and insisting that he resigns. That was a way better performance than what he’s doing now.