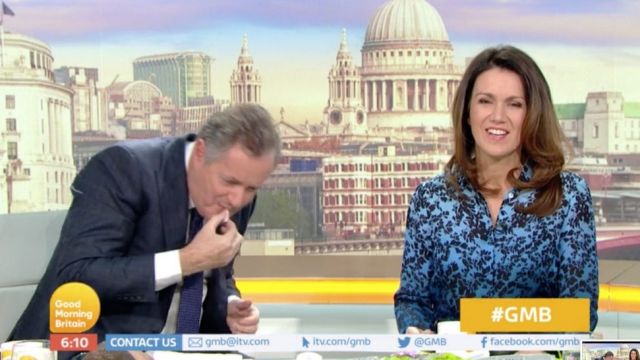 I get the fact that Piers Morgan is a master troll and he plays the role perfectly, but I really can’t get his vegan and vegetarian banter because it really does make no sense whatsoever.

Morgan pursued his ridiculous agenda of belittling vegetarians again on Good Morning Britain this morning, when he tried some vegetarian Percy Pigs and spat them out because of how they tasted, exclaiming that they tasted like washing up liquid. This is despite the fact that he had never even tried the original Percy Pigs and had no idea what they should taste like.

His argument for this is that he doesn’t like vegetarians having the same kind of sweets as carnivores which doesn’t even make sense. If vegetarians get a vegetarian version of the sweet, why is it a problem as it’s not harming anyone? If anything it’s probably creating more jobs as more people need to be involved to get these extra shipments out. Idiot.

OK so he didn’t actually spit them out in those clips, but I’m sure you get the picture that he was just acting like a petulant child about it all in a really unnecessary way. Pretty easy to visualise what it would have been like I’m sure.

Still can’t really comprehend the hatred that vegan/vegetarian versions of your favourite snacks seem to generate with the wider world and people like Morgan, but I guess maybe I’ve got more important things to get worried about than that. Would suggest Morgan does the same, but he has built a career off disagreeing with everyone so I doubt he’s gonna listen.

For more of the same, check out Piers Morgan betting a vegan £1000 that he’ll outlive her. Classic television.