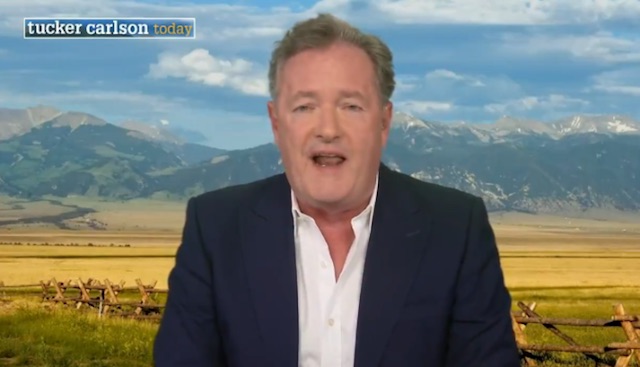 The Easter weekend has come and gone and we all enjoyed the sunshine and some chocolate eggs for a couple of days, but now we’re back at work and it’s snowing and so of course Piers Morgan is going to re-appear and start banging on about Meghan Markle again.

Morgan was speaking to Fox News presenter Tucker Carlson last night about the reasons for his departure from ‘Good Morning Britain’ when he said the following:

I still don’t believe what they were saying.

In particular, I don’t believe what Meghan Markle said. 17 different claims by the pair of them have now been proven to be either completely untrue or massively exaggerated or unprovable.

I didn’t believe Meghan Markle. A huge furore erupted throughout the day. I was an outrage.

I wasn’t allowed to have an opinion that I didn’t believe what she was saying, even though it was clear to me in real-time, as I was watching the interview that there were a number of things which just couldn’t be true.

Yeah I suppose we shouldn’t really be that surprised that this is the story that Piers is continuing to pedal, although I’m not sure how he can watch an interview with someone talking about their life and say it all isn’t true when he can’t possibly have any knowledge of what was happening or how they were feeling – but I guess that’s just Piers Morgan for you.

Find it way stranger that the first interview he’s doing about this is for Fox News in America though – do people in America even are that he’s no longer presenting ‘Good Morning Britain’? Really weird flex from everyone involved.

Anyway, expect Piers to pedal this narrative until the end of time and never shut up about it. Be writing about it in 20 years probably.

For more of the same, check out Piers saying that he’s coming for ‘high profile woke hypocrites‘. Watch out!