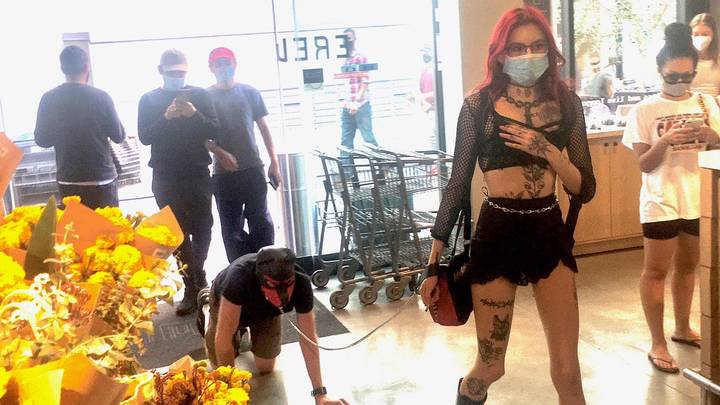 I think everyone knows that the dominatrix/kink scene exists these days, but whenever we’re exposed to it in our every day lives it stills comes as a bit of a shock as we tend to think of it solely existing behind closed doors in some danky sex dungeon somewhere.

Anyway, here are the tweets:

I just wanted some juice.

I was out with my sub and my friends shooting some videos and just doing shopping.

We stopped in Erewhon.

Lots of cameras and attention, but the security let us through valet and let us check out our pricey basket before finally asking us to leave.

I wasn’t whipping him though.

I did paddle him. No more than twice though.

He tried to touch my leg too high up my thigh and I didn’t like it.

There weren’t any children nearby or anything.

Anyway, I suppose we shouldn’t really normalise this behaviour because it is a bit creepy and weird for children to see stuff like this going on in public, but I don’t think it’s as extreme and strange as people probably thought it was 20 years ago. Kinda puzzling that it’s got so much traction when I think about it, but I guess it still isn’t something you see every day so there you go. Maybe one day people won’t bat an eyelid at it, but it doesn’t look as if that day is coming any time soon.