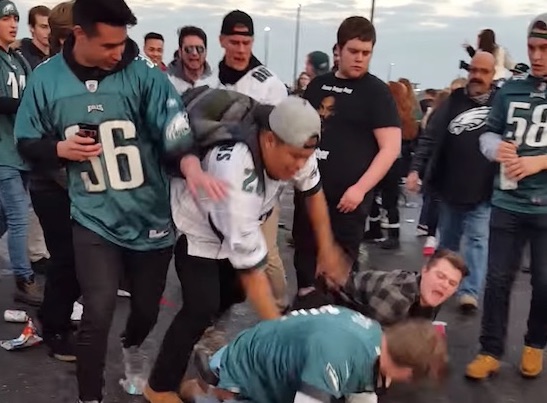 Tailgating is part and parcel of attending American football matches and honestly looks like the most fun part of the game, as you meet hours before in the parking lot outside of the stadium to get wasted, blast out music and party before the game starts.

These events are usually meant to solely promote the home team as there are very few away fans in America on account of the country being so gigantic, so you don’t really expect any trouble or beef, but sometimes things have been known to get out of hand. Not sure why this would happen at the Eagles match on Sunday – it was like the first time the Eagles have been in the Conference Championship for about ten years – but nevertheless it did, as the footage below shows.

It looks as if all the Eagles fans are suitably rowdy and dancing around shouting, when someone throws a bottle at another guy and it all kicks off, leading to a mass brawl between about 15 people. Check out the footage below but make sure you watch it all so you can catch the twist ending. Also look out for the gun in the back of the one guy’s jeans – things could definitely have escalated quickly with that in play:

Yeah, not sure what’s going on with those girls dancing at the end of the video but it’s definitely a fitting end to this completely bizarre video. I thought Philadelphia was meant to be the city of brotherly love – surely it would have made more sense for all these guys to join up and get behind their team rather than beat each other up?

The Eagles won anyway so it didn’t affect the result of the game too much, but still, let’s not see a repeat of this at the Superbowl eh? For more tailgating, check out this guy snapping his leg in two at a tailgating party. Idiot.