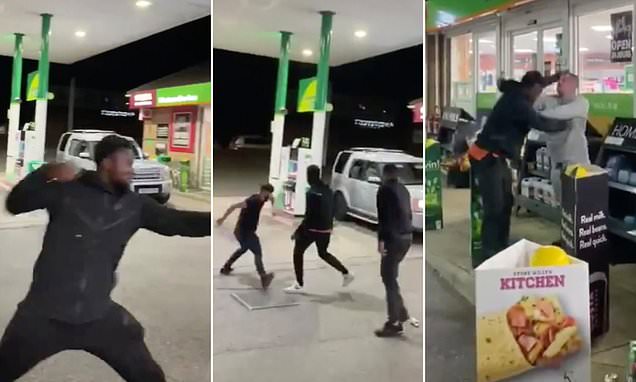 This footage comes from outside a BP petrol station in Wilton Road in Salisbury, Wiltshire, and features two drunk morons drinking beer and yelling at random person in his car before deciding to escalate the situation.

Surely when you’re cracking mum jokes at a complete stranger and then throw a can of beer at their car, you have to be prepared for the very real possibility that they are going to want to scrap. Somehow, these plonkers did not see it coming:

Welp, that was well deserved I think? I mean there’s nothing worse than those chavs who stand outside shops getting pissed and giving it to everyone who goes by like a bunch of helmets. Banter is one thing but lobbing a can of beer at someone’s car?  That’s just pure disrespect and begging for trouble.

Somehow these chavs were completely unprepared and it was pretty funny watching the main troublemaker legging it into Londis and leaving his mate outside to take a beating. I think the cameraman (who hilariously was just standing there filming his mates being beat up) was about to be on the receiving end of a slap as well as the video cut out? Pretty poor considering it was essentially a 2-on-3 situation. Oh well, lesson learned hopefully.

To watch some lunatic in Liverpool try to pick a fight with a whole bunch of people outside Tesco’s, click HERE.