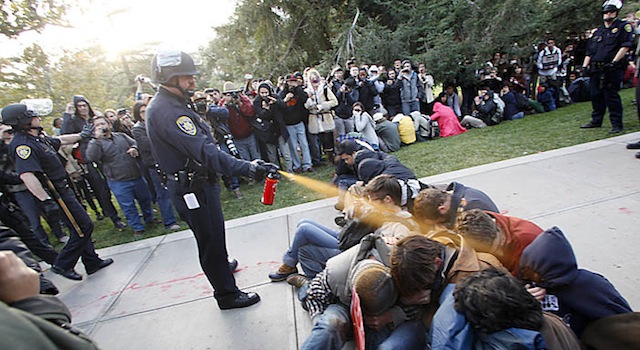 John Pike became famous when he pepper sprayed peacefully protesting students at UC Davis. He has been awarded $38,000 compensation after the incident caused him to suffer “depression and anxiety”

Remember the friendly neighbourhood policeman in America who pepper sprayed a bunch of students at UC Davis in 2011 for the crime of sitting across a path and refusing to move? Well if not, watch the cheeky chappy at work protecting and serving his community:

As you can imagine, the actions of this policeman made a lot of people angry when it went viral. He was placed on administrative leave after the incident took place on 18 November 2011, and was eventually fired 8 months later. The protestors who had been acting in solidarity with the Occupy movement, were paid $1 million collectively in compensation by the University of California – that’s $30,000 each.

And justice was served.

Well, not quite. Last week the UC campus policeman in question, John “make-the-hippies-cry” Pike, was awarded $38,000 in compensation by the University of California – $8,000 more than the compensation paid to the students he pepper sprayed.

You see, while the rest of the sane human race was worrying about the rights of the protestors to peacefully demonstrate, and focusing on the serious implications to public trust in the police after such an outrageous and gratuitous incident of police brutality against a group of peacefully protesting students – there was a real victim out there.

I’m talking about the man who strode forward with his head held high against a “hostile crowd” (the term used by the official police report) of seated teenagers. This hero in uniform didn’t hesitate to throw himself headfirst into a potentially peaceful situation. He knew what needed to be done to shatter this menace to the free world. Like Achilles he stood eye-to-eye with the “hostile crowd” and then watered them like a bed of particularly fragile tulips with a highly irritant orange liquid.

Was this hero thanked for his efforts? No. He was thrown out and left to the wolves. It is said that he suffered from depression and anxiety after the incident. Poor lamb.

So there you go – justice for the little man against the tyrannical hordes of passively resisting, sedentary young people who sit across paths.

I hope he enjoys his money. I hope he buys himself a huge meal at a steakhouse – with complimentary coffee for his brave policing that day. I hope that all the coffee loosens his bowels and he shits himself right there in the restaurant. Then he can wipe his arse with all those $100 bills. Wanker.

The lawyer for the students said that the settlement to Mr Pike “sends a clear message to the next officer nervously facing off with a group of passive, unarmed students: Go on ahead. Brutalise them. Trample their rights. You will be well taken care of.”

â˜› Watch This Next: Police Attack And Stick Dog On 20-Year-Old