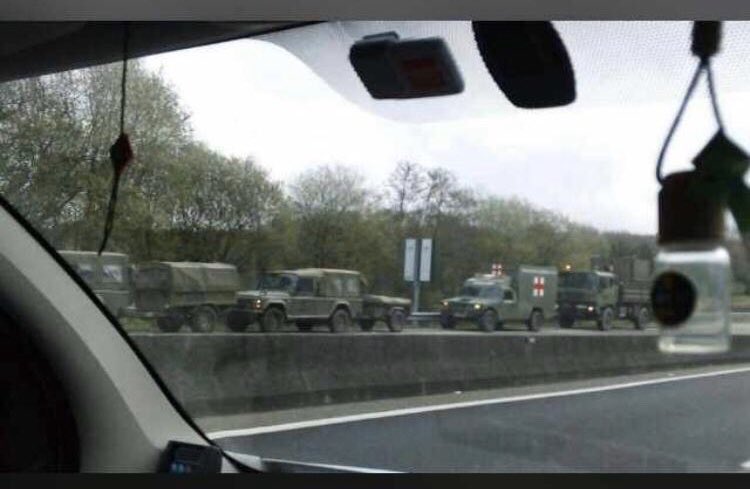 Could a lockdown be just around the corner?

Well that escalated quickly  – I think it’s less than a week since Boris Johnson said we wouldn’t be closing down any schools and would be looking to develop herd immunity and that’s just gone out of the window at his latest briefing and many people on Twitter are fearful that the country is going into a full state of martial law from Friday.

As is usually the case with these things it’s the old ‘I heard if off my brother’s girlfriend’s sister’s uncle’, but the main sources seem to be a couple of pictures that have been shared on Facebook of the army on the motorway, another video of someone driving down a motorway with a bunch of tanks being transported somewhere and a WhatsApp message. Let’s have a look at them shall we?

So it’s official, they have rolled out army trucks in order to assist with the lockdown for 15 days proceeding from this Friday (UK) – apparently only essential travel is authorised with supervision for basic actions such as shopping pic.twitter.com/VR035y4rDG

Thursday lockdown in Uk the army will announce tomorrow the media not revealing as then tomorrow be panic everywhere pic.twitter.com/ERp0zUXtCh

I mean all five of those things do look kinda scary but when you actually look at them there’s absolutely no evidence that the video or pictures or army vehicles and officers walking around are from this week or even this country. You might think the video is a bit harder to fake but it’s pretty easy to dub the audio over the top of something like that. And as for the Whatsapp message that literally proves zero because it’s a WhatsApp message – anyone can send one saying anything, means absolutely zilch.

I’m not really sure what the endgame here is of the people that have been sharing these images and videos – to send everyone into an absolute panic? or to inform people ahead of the major lockdown? – but whatever their motives I’m not sure they’re that useful. The UK Defence Jounral have already debunked one of the images, saying the following:

Hi, a few points on this.

1. That’s not the English flag, it’s a medical symbol (the Red Cross).
2. The British Army don’t operate those vehicles.
3. That’s the wrong side of the road for the UK.

Hope this helps clear this up, those images aren’t from the UK.

I mean that didn’t exactly take that long to figure out did it – fairly certain the other ones will go the same way too as well. The way things have escalated over the past 48 hours and seem to be exponentially escalating though, I doubt anyone would be too surprised if this did end up happening. What a time to be alive.

For more of the same, check out these nuts who think that Coronavirus is a cover for Trump taking down an international celebrity paedophile ring. People really think that is happening, yeah.