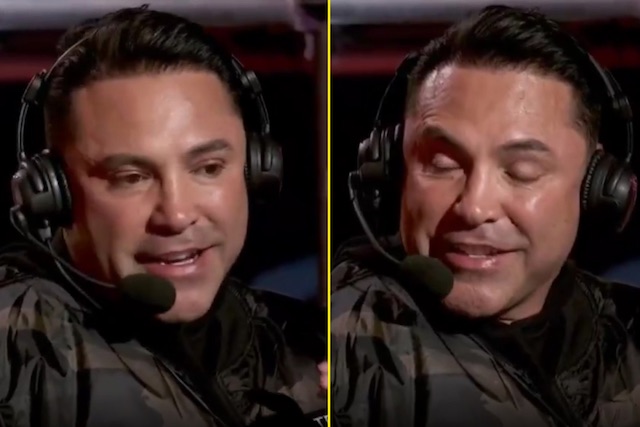 I’m not sure how many people in this country actually stayed up to watch Ben Askren V Jake Paul, but I’m guessing that it wasn’t too many and most of us would have woken up on Sunday morning to hear about Askren embarrassingly getting knocked out in the first round.

Whilst that’s undoubtedly the headline from the event, one of the most bizarre subplots that happened – and there were definitely a fair few – was Oscar De La Hoya turning up to commentate on the Frank Mir – Steve Cunningham undercard fight. The man was clearly off his face either from drinking or doing blow and talked complete nonsense for most of his appearance, here are a few of the highlights:

Why does it feel like Oscar De La Hoya is Drunk? 😂 pic.twitter.com/pZeoOCtdes

What the hell is Oscar De La Hoya talking about? pic.twitter.com/xvo5cnpYwH

Lol. That wasn’t as bad as I thought it was gonna be but he definitely loses his train of thought at some point and starts rambling and not really making any sense. The internet obviously had a field day with this one, here are some of the best reactions:

They dipped Oscar De La Hoya in all the drugs before he sat down for commentary. #PaulAskren

Oscar De La Hoya sounds like the drunk uncle at a wedding reception that refuses to leave and just embarrasses the family.

Oscar De La Hoya before the show when they told him to stop drinking #TrillerFightClub pic.twitter.com/xZCUtUdIs4

What an icon. Hopefully he’s talking like that on July 3rd too. Might be worth tuning in.

Anyway, for more of the same, check out this story Steve-O told about an epic cocaine binge with Mike Tyson. What a legend.