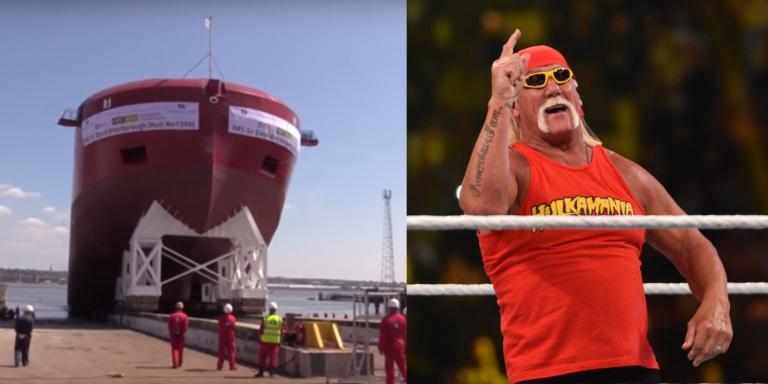 Blast from the past.

It’s been a hot minute since the whole Boaty McBoatface debacle where the public were asked to vote upon the name of the a new ship and that was the overwhelming victor, but today they’re (gender neutral pronoun) back in the spotlight after people noticed that they bore more than a passing resemblance to WWE legend Hulk Hogan.

Of course, Boaty McBoatface was renamed as the RSS David Attenborough when common sense prevailed – kinda makes you think why there isn’t the outcry over this popular vote being shut down like there is about Brexit taking its time – but at its official unveiling the whole Hulk Hogan thing decided to rear its head. Of course, Twitter was to blame:

Whatcha gonna do Boaty? Yeah there’s not really much more to say about this other than it’s another stupid thing to happen to Boaty McBoatface during it’s brief period of existence which might make you forget that it’s actually a state of the art research boat that’s going to be responsible for some serious science in the upcoming years. Not sure exactly what because I’m more distracted by how stupid it looks and how stupid its name is, but that’s 2019 for you isn’t it? Stupid.

Good luck to Boaty on his upcoming mission though and hopefully we don’t see him and David Attenborough teaming up for a tag team match against Hulk Hogan and Vince McMahon for his image rights at WrestleMania 2025. Dumber things have happened.

For more of the same, check out Hulk Hogan Vs The Rock at WrestleMania back in the day. Now that was a legendary match.