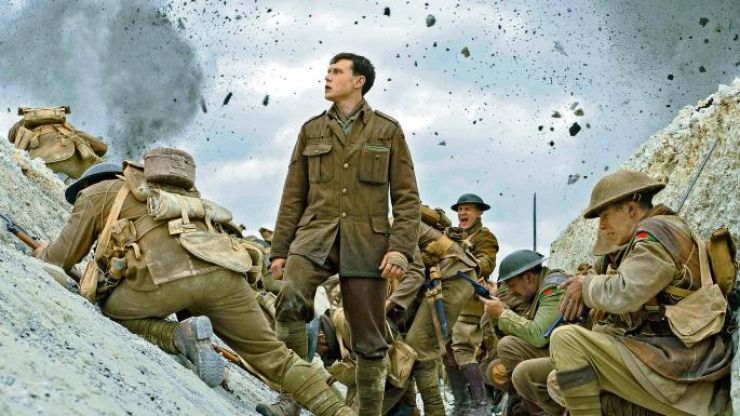 War movies are always a fairly popular sub genre with a couple coming out most years at least, but I think most people will probably agree that it’s been a long time since one has been powerful as ‘Saving Private Ryan’ though. ‘Dunkirk’ just wasn’t that good, OK?

Spielberg’s epic might finally be usurped though by Sam Mendes’ epic new WW1 movie ‘1917’. The movie tells the story of two soldiers named Schofield (Captain Fantastic’s George MacKay) and Blake (Game of Thrones’ Dean-Charles Chapman) are given a seemingly impossible mission: to cross enemy territory and deliver a message that will stop a deadly attack on hundreds of soldiers, Blake’s own brother among them.

That doesn’t sound too revolutionary, but apparently the movie is shot with the appearance of one long continuous take – much like Birdman or maybe even Victoria (although that actually was one long continuous take) and the cinematography from Roger Deakins (No Country for Old Men, Fargo, Blade Runner 2049) really drops you in it from the start and never lets you come up for air.  Anyway, check out the trailer below as well as some quotes from critics to see what all the fuss is about :

The Guardian – “Sam Mendes’s 1917 is an amazingly audacious film; as exciting as a heist movie, disturbing as a sci-fi nightmare.”

Vanity Fair – “It’s a staggering piece of filmmaking, admirable both for its complexity and its control.”

The Hollywood Reporter – “This is a protean display of virtuoso filmmaking, one that film aesthetes will wallow in but that even ordinary audiences will note and appreciate.”

Variety – “Astonishing as his filmmaking can be at times, it’s Mendes’ attention to character, more than the technique, that makes “1917” one of 2019’s most impressive cinematic achievements.”

Entertainment Weekly – “Legendary cinematographer Roger Deakins (No Country for Old Men, Fargo, Blade Runner 2049) effectively drops the viewer in the center of the story and compels them to stay there, fully immersed in every muddy step, hunger pang, and rifle click.”

I mean yeah that does sound like it’s going to be good doesn’t it? And the trailer looks like it’s literally going to put their two main characters through hell trying to deliver that message and then they’ll probably end up dead as well.

Gonna be a real treat, just a shame we’re going to have to wait until January 10th to see it – although I reckon it’s probably going to be worth the wait. See you at the Oscars.

For more war films, check out this Shia LaBeouf one from a couple of years ago. Not ‘Fury’.