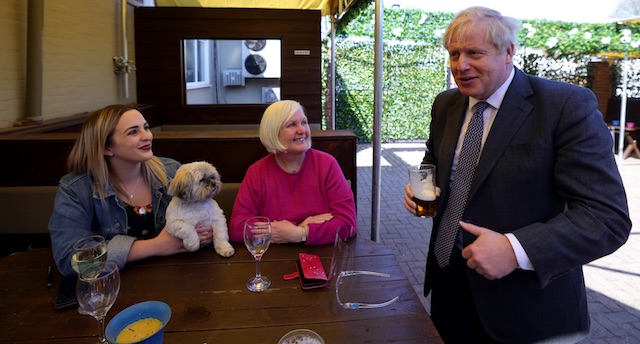 Pubs and hospitality venues have been open for just over a week now with the proviso that customers sit outside on tables and follow the guidelines that are in place – such as table service only and punters having to remain seated whilst consuming food and drink and wearing masks if they’re moving around the venue to go to the toilet or for any other reason – and it seems like it’s going pretty well so far and everyone is having a good time. Awesome.

Of course though, itts been at least a few hours since this government has done something completely stupid, so obviously Boris Johnson decided to put up a photograph of himself breaking all of these rules on a recent visit to the pub. Take a look at it below and see what you think:

Great to be back at the pub again, and to see so many reunited with friends and family.

OK, so I’d be lying if I said I didn’t understand why he’s put a picture up like that, but how hard is it for Johnson or someone on his team to realise that he’s breaking a whole load of his own rules by choosing a photograph like that? Surely it wouldn’t be that hard to put him wearing a mask, or sitting at a table with some other customers talking to them with a beer in his hand? The people they hire to do their comms and social media are so tragically inept.

Anyway, obviously most of the country wasn’t too happy about seeing something like this, so here are a few of the funniest responses:

Boris: You can go to the beer garden but wear a mask and don’t mix with other tables

Oh, so we ARE allowed to mix with other tables? Decent 👍

Need to sit down if you’ve got a drink mate https://t.co/8IB7GDQcCW

I told everyone today and no wonder they didn’t listen… you’re not allowed to stand up and drink mr prime minister https://t.co/GmybrdtHkt

You’re not allowed to visit other tables in pubs, drink anywhere but at your table and you’re supposed to wear a mask the moment you leave your table……….. obviously rules don’t apply to Tory wankers with awful haircuts https://t.co/nv4tTzIWTD

Fuck off dictator nazi scum @BorisJohnson do the world a favour and take yourself off this planet gimp we should do what we like when we like how we like you are not our parent https://t.co/sYVgSN9F42

OK that last one there was probably a bit much, but it’s always funny to include some idiot going off on one for no real reason. There were of course a lot of people in the replies having a good laugh comparing this photo to the video of Keir Starmer getting kicked out of the pub who visited on Monday, but at least he was wearing a mask and following Boris Johnson’s rules hey? Gotta admit that was really funny though as well.

For more of the same, check out this thread someone created of Matt Hancock being completely and utterly weird. Very strange behaviour.