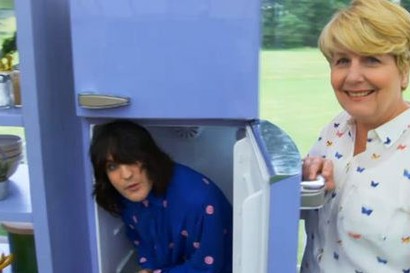 The Great British Bake Off has always been a controversial show, but this is usually to do with the fact that there are hundreds of overly sexualised references to pastries in every single episode and not because someone is hiding in a fridge.

Of course, the show has changed networks and has a whole new presenting team in place for the latest series and no doubt everyone was wondering just how this was going to affect the quality of the product when it returned last week. No matter what people thought of it or predicted about it though, I don’t think anyone expected Noel Fielding hiding in a fridge to be the most talked about point of the show.

Even when watching the segment I doubt anyone thought that Noel coming out of a fridge was that big a deal, but this is completely wrong. Not only did Twitter go completely mad about it (see below), but Ofcom also revealed that they had received at least 24 complaints about it and are considering investigating it further:

#GBBO Great British Bake Off – Noel Fielding hiding and being shut in a fridge by Sandi Toksvig. Great message to all the kids watching.

Children have accidentally died playing inside fridges & freezers. What was @Channel4 thinking of putting #GBBO presenter in a fridge?

Well done @channel4 – showing a man hiding in a fridge. Children have died doing that. Not funny. #GBBO

I suppose they have got a point that children may copy Fielding’s actions and have died from doing that, but I think you’ve gotta be fairly dumb to copy someone’s actions from a TV show, especially when that action is climbing into a fridge. I mean even little kids have enough common sense to know that’s a bad idea, surely?

No news yet on what Ofcom are going to do about the incident, but it seems as though Bake Off will continue to be “controversial” in its new home, so at least we’ve got that to be thankful for. For more Bake Off, check out Paul Hollywood turning up to a pub in full Nazi uniform. Excellent.