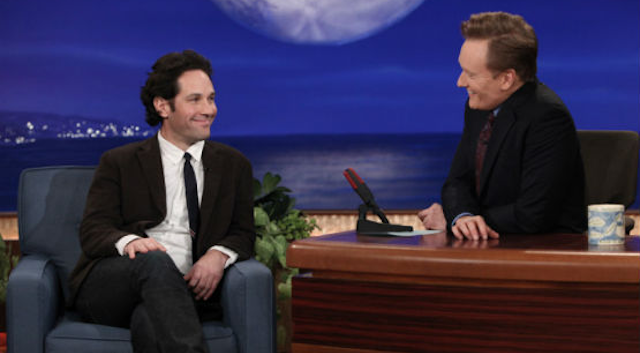 This is really weird but also really funny, and kind of surprising that he’s got away with it for so long.

Late night TV talk shows are great as they really give the guests the chance to cut loose and try and be really funny/charming and tell some cool stories, as well as promote whatever the hell they’re doing at the moment. Except for Paul Rudd that is.

For some reason, every time he’s been on Conan O’Brien in the past instead of showing a clip of the movie that he’s currently promoting, he’s decided to show a short clip from a movie he was in when he was a kid called Mac & Me, which is kind of like a way dumber and crapper version of E.T., but I can’t really get how nobody has picked up that he’s been doing this for so long (there are A LOT of clips in this supercut of them) or why he’s been doing this for so long but I think it’s a pretty dope prank.

Long may it continue.