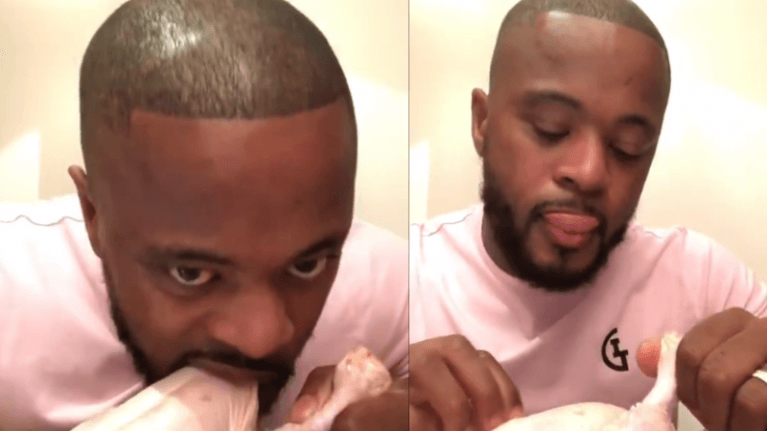 What are you up to Evra?

Patrice Evra used to be one of the best left backs in the world during his stint at Manchester United – and maybe even during his time at Juventus too – but recently he’s become more of a laughing stock for signing short term deals at crappy clubs and not being able to get into the team whilst posting increasingly bizarres videos on his social media accounts.

The latest treat from Evra seems to be a tribute to our friends across the pond and the holiday of Thanksgiving, as it shows him attempting to prepare a chicken/turkey in one of the weirdest ways possible. Get a load of this – and be warned it does get freakier and freakier as it goes along:

Wow I mean what would possess someone to upload a video like that to millions and millions of people? It’s not even funny it’s just kind of like Evra has completely lost his marbles and should be institutionalised or something. Especially when he slaps the chicken’s butt – what the hell is all that about?

I mean can you imagine what would have happened if Sir Alex Ferguson had been manager at Manchester United and he was posting stuff like this all the time? He would be packing his bags quicker than Memphis Depay. Come to think of it, it’s kinda odd that Evra is such a weirdo and managed to succeed whilst he was at Man United given the temperament there, but maybe this is exactly why he spends his time acting like this now – he’s making up for lost time.

For more Evra, check out this story about his taking a shit in Gerard Pique’s shoes. Mental.