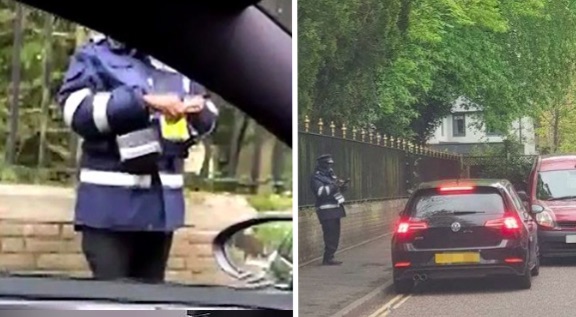 The most thankless job.

Being a traffic warden is up there alongside slaughterhouse and sewing worker as one of the worst jobs going in the UK.

There’s certainly no other job that derives so much hate from the general public. One dude who definitely doesn’t give a shit about what anyone else thinks is this parking warden, who not only blocked the road with his van, but then proceeded to hand the car he was blocking with a ticket – while the driver was still sat in the car!

You’ve almost got to admire the guy – ZFG:

We must help Robert of @TheHomePartners : Technically @EssexPoliceUK the Parking Attendant driving FG06 VKA was causing an obstruction on the public highway. This was so wrong: #CommunitySupport pic.twitter.com/jwIMOebiC3

Driver Richard Austin watched in disbelief as the guy slapped the ticket on the windscreen of his VW Golf, despite the fact that the engine is still on.

I was watching in disbelief. At first, I thought ‘why has the car got its headlights on’ but then I realised it was his hazards and he was giving out a parking ticket.

Apparently the warden told him he’d issued the fine because “he didn’t like the way he drove towards him in the road”. Eh? Surely that’s not his job to decide.

But I said ‘look, you’re a traffic warden, not a policeman,’ and he said ‘no, I control these roads’.

It was the most bizarre conversation I’ve ever had with a man.

The guy is taking control of the highway himself. He’s a local jobsworth.

Sounds it – hopefully Richard didn’t have to pay the fine in the end, because he certainly didn’t deserve it.

For more of the same, check out this article where we answer the question: is being a traffic warden worth dying for? Short answer: nope.