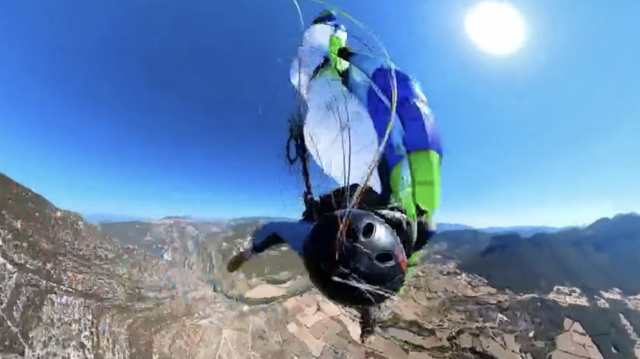 The reason why I will never sky dive.

Paraglider Kevin Philipp is lucky to be alive after his glider lines became badly entangled as he plummeted to the ground on a recent sky dive. Fortunately, he was able to deploy his rescue parachute one second before impact – literally:

In the words of Jordan Peele – NOPE. Fair play to Kevin for staying focused and utilising every last second to ensure he survived what must’ve been a terrifying experience. Even scarier when you realise how rare of a situation this is, as Kevin later said on social media:

“This occasion is quite unlucky and rare. Just to keep in mind. Fly high, land safe 😉”

All these acro paragliders are the same really – guys and girls with balls of absolute steel. Not only because they have the guts to do this sort of thing in the first place, but also because you just know Kevin is back jumping out of planes already after nearly dying on camera. You have to respect it really.

For the absolute maniac who jumped 25000 feet out of a plane without a parachute into a net, click HERE.