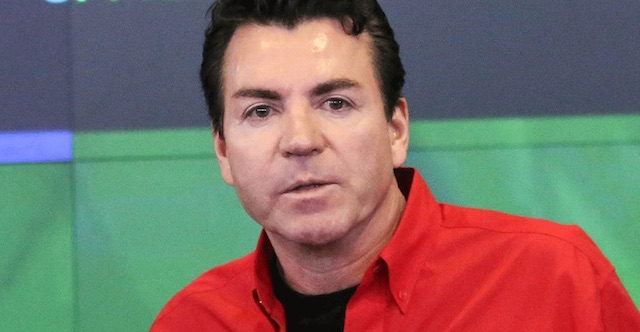 You might remember that a couple of years ago that there was a massive controversy surrounding the founder of Papa John’s – a guy named John Schnatter – saying the N word on a conference call and subsequently having to resign from his post as chairman of the board at Papa John’s. It was a bit of a mess really.

You might also think that the guy would have learned his lesson about using that word, but it seems like he really hasn’t judging by this bizarre interview that he just took part in on OAN. I’m not sure if anyone wanted to know what Schnatter has been doing for the last couple of years, but apparently he’s spent it trying to get the N word out of his vocabulary:

Papa John’s ex-CEO says he’s been working for the last 20 months “to get rid of this N-word in my vocabulary” (h/t @mount_bees) pic.twitter.com/8heITnJJxA

What? However you want to look at that there’s just no way it comes across well, even if Schnatter does is trying to show that he’s changed. Either the word was so ingrained in his vocabulary and he was saying it so much that it’s literally impossible for him to remove it after 20 months of trying or he has managed to do so but it’s taken him 20 months of trying. Neither is a good look.

Surely if you want to stop saying a word then you just……stop saying it? Is it really that hard and is it really something that you should really come out and brag about? Feel like everyone had probably forgotten about his casual racism but this issue is going to put him back another few years because it’s so tone deaf. Honestly.

For more of the same, check out when Schnatter said he was so depressed that he at 40 Papa John’s pizzas in 30 days. That is pretty extreme to be fair.