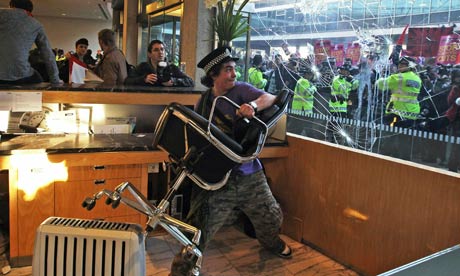 Fees will rise, cuts will be made, politicians will break promises. Like Tupac said thatâ€™s just the way it is.

Last week saw Round 2 of the student protests against the government’s plans to increase university tuition fees to £9000 and cut funding. 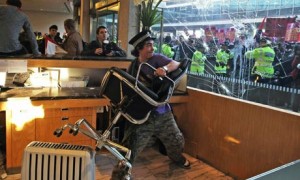 Even as someone who prides themselves of being pretty on the ball, and working next to two of the biggest universities in London, I have to admit I was totally unaware that the protests were due to happen until I actually saw the lazy tax-dodgers student procession walk right past my window — the cheek.

Unsurprisingly, the Five-0 had ramped up security following the carnage last time round that climaxed in an angry Goldsmiths University lecturer —led mob throwing a fire extinguisher off a roof and bumrushing the Conservative party headquarters. Who’d have thought that poncey failed thirtysomething vegetarian artists who spend term time trying to batty chirpse art students and the summer holidays with their moms could have caused such beef.

It goes without saying that these protests will achieve absolutely nothing, other than giving the class of 2011 some nostalgic memories of everything momentarily looking like it might kick-off so they might not have to hand in their coursework.

Fees will rise, cuts will be made, politicians will break promises. Like Tupac said that’s just the way it is.

If you feel so strongly about potentially not being able to send your kids to University then maybe you should take a leaf out of the Americans book and go start a college fund. Or cheaper still become a pushy parent and hope your kid is talented enough to get a scholarship for playing college ball or spelling B’s or some shit.

Failing that I heard that universities in Scandinavia and Holland were pretty cheap and taught everything in English. The idea of my unconceived child learning another language and gaining some life experience in some leafy university town full of sexy European babes who dig his charming English accent seems like a pretty decent alternative to me.